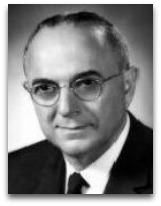 In existographies, Frederick Rossini (1899-1990) (IQ:180|#138) [SN:7] (RE:91) [CR:175] was an American physical chemist, chemical engineer, and chemical thermodynamicist, a product of the Lewis school of thermodynamics, noted for his 1950 textbook Chemical Thermodynamics, and most importantly for his 1971 Priestley Medal address ‘Chemical Thermodynamics in the Real World’, in which he used a modified version of the combined law of thermodynamics to explain the paradox between freedom, as in being free to do what one wants, and security, as in being safe from harm, in social life; in that the more secure one is, the less free he or she will be, and conversely; very advanced for 1971 and in fact is still advanced even in modern times (see: human free energy).. [1]
Priestly Medal address

In 1971, American chemical thermodynamicist Frederick Rossini argued that governments are regulated by the laws of chemical thermodynamics. In particular, during one part of his Priestley Medal address, he used a modified version of the combined law of thermodynamics, as shown below, to understand the paradox between freedom and security in social life: [2]

This lecture, 35-years later, in 2006, came to spark quite a debate between Americans chemist Harold Leonard, physical chemist John Wójcik, and chemist Todd Silverstein. [3] To cite one opinion in this debate, voiced by Wójcik:

“Worst of all, there is some danger that chemical thermodynamics will have ascribed to it a power that it simply does not have, namely, the power to explain the human condition.”

Religion
In 1971, Rossini in his “Chemical Thermodynamics in the Real World”, ended with the following paragraph, namely his view that a “creator” (god) fashioned the laws of thermodynamics: [7]

“The point of all of this is that our creator has fashioned laws that are deep seated and broadly applicable, that science is heavily intertwined in our everyday life, frequently without our realization, that we need to break down the compartmentalization of knowledge, that we need to work for a unification of learning, and that we need to understand better the meaning and purpose of life.”

In 1999, Ernest Eliel, in his NAS existography on Rossini, described him as devout Catholic: [4]

“Rossini was a devout Catholic all his life, and this was probably an important factor in his move to the University of Notre Dame in 1960 as dean of the College of Science there. The head of the chemistry department G. F. D'Alelio had resigned the previous year and the department was rudderless. Realizing that chemistry was one of the better departments in the college but needed help, Rossini additionally assumed the position of acting head, which he filled for over three years. (I followed him as head in 1964.) The combination of these administrative responsibilities obligated Rossini to suspend his beloved thermochemical research for the 11 years he stayed at Notre Dame.”

This classifies Rossini, paradoxically, as a creationist thermodynamicist.

Education
In 1920, at the age of twenty-one, Rossini entered Carnegie-Mellon University in Pittsburgh, graduating with a BS in chemical engineering in 1925, followed by an MS degree in science in physical chemistry in 1926. As a result of reading American physical chemist Gilbert Lewis and Merle Randall's 1923 textbook Thermodynamics and the Free Energy of Chemical Substances he wrote to Lewis and a result he was offered a teaching fellowship at the University of California at Berkeley. Among his teachers were Lewis as well as American chemist William Giauque, winner of the 1949 Nobel Prize in chemistry for studies on the properties of matter at temperatures close to absolute zero. Rossini's doctoral dissertation on the heat capacities of strong electrolytes in aqueous solution was supervised by Merle Randall. His PhD degree was awarded in 1928, after only 21 months of graduate work, even though he continued to serve as a teaching fellow throughout this entire period.

Quotes | On
The following are quotes on Rossini:

“In 1971, Rossini received the Priestley Medal, the highest distinction conferred by the American Chemical Society, during which, in his address ‘Chemical Thermodynamics in the Real World’, he made a clever comparison of the counterplay of enthalpy and entropy in thermodynamics with that of security vis-à-vis freedom in the world at large.”

“Rossini was one of the preeminent thermodynamicists of the twentieth century.”

Quotes | By
The following are quotes by Rossini:

“Gilbert Lewis: inspirer to many to travel the broad highway of thermodynamics.”