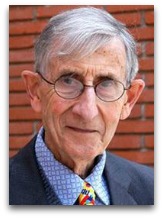 In hmolscience, Freeman Dyson (1923-) (CR:20) is an English-born American theoretical physicist, a 2014 smartest person existive (#9), noted for his 1970s publications on energy, the universe, and intelligent beings, the latter of which he argues generate an amount of entropy per thought.

Overview
Dyson is an Aneki.com second ranked (behind Hawking) “Greatest Living Physicist” (Ѻ); noted $850/day rent-a-genius “Jason” think tank member (Ѻ); his 1971 “Energy in the Universe”, cited by Peter Atkins (1992), in which he attempts to explain how things degrade in the movement of the universe in terms of the second law and weak and strong interactions; his 1979 “Time without End: Physics and Biology in an Open Universe”, cited by Frank Tipler (1994), argues that life in the future will be able to cope with the cooling and dimming expected from heat death of the universe; somewhere postulates that intelligent beings generate a fixed entropy ΔS per thought; downgrade (↓) for, supposedly, being an anti-reductionism Christian. [1]

God
In 1992, Dyson, in interview with Wim Kayzer, stated the following about his belief in god: [5]

“I like to describe [God] as the “world soul” — which was my mother’s phrase — so that we are little bits of the world soul. And so it may well be that we are part of the world’s growth. That’s the kind of world I would like to live in, and as a working hypothesis it seems to me quite reasonable. In detail the world shows no evidence of any sort of conscious design. If there is to be a conscious design, it probably has to be ours.”

“It is remarkable that mind enters into our awareness of nature on two separate levels. At the highest level, the level of human consciousness, our minds are somehow directly aware of the complicated flow of electrical and chemical patterns in our brains. At the lowest level, the level of single atoms and electrons, the mind of an observer is again involved in the description of events. Between lies the level of molecular biology, where mechanical models are adequate and mind appears to be irrelevant. But I, as a physicist, cannot help suspecting that there is a logical connection between the two ways in which mind appears in my universe. I cannot help thinking that our awareness of our own brains has something to do with the process which we call "observation" in atomic physics.

That is to say, I think our consciousness is not just a passive epiphenomenon carried along by the chemical events in our brains, but is an active agent forcing the molecular complexes to make choices between one quantum state and another. In other words, mind is already inherent in every electron, and the processes of human consciousness differ only in degree but not in kind from the processes of choice between quantum states which we call ‘chance’ when they are made by electrons.”

In 2014, in a debate (Ѻ) between Deepak Chopra and Richard Dawkins, Chopra asserted, per above citation, supposedly, the statements that Dyson says that “atoms have sentience” and also that “atoms have awareness”. (Ѻ)

Entropy of beings
In human thermodynamics, Dyson also postulates that intelligent beings generate a fixed entropy ΔS per thought. [2] In his 1999 book Origins of Life, Dyson supposedly argues that the complexity of a living organism is proportional to the negative of its entropy and also computes the entropy of a human being. [3]

Purpose?
In 1971, Dyson, in his article “Energy in the Universe”, introduced a term called "quality" that incorporates a energy-entropy type description of different forms of energy, such as light.

English physical chemist Peter Atkins cites Dyson's 1971 article significantly to explain how things degrade in the movement of the universe in terms of the second law and weak and strong interactions, as a basis to argue for the purposeless of human existence. Atkins summarized things such that a high-quality (low-entropy) form of energy as contrasted with heat, which Atkins summarizes as a low-quality (high-entropy) form of energy, or something along these lines, and uses this model to conclude that "life lives off quality", which is short to mean that life can only emerge on a planet surrounding a star (light) and not from the heat of the planet alone. [4]

In 1992, Dyson, in interview with Wim Kayzer, stated the following view on purpose: [5]

“The tree of life becomes more diverse as it evolves… Whether [evolution] has a purpose or not… I wouldn’t be dogmatic. We certainly don’t understand whatever purpose it may have, but to deny the existence of a purpose seems to me as foolish as to believe that it has to have a purpose. I would say, we’ll wait and see. Maybe it does have a purpose. Maybe we’ll create a purpose. I think it’s foolish to preach about questions like that.”