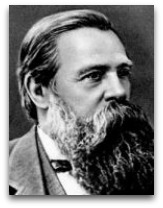 In existographies, Friedrich Engels (1820-1895) (IQ:#|#) [RGM:944|1,500+] (Gottlieb 1000:415) (FA:104) (CR:51) was a German social scientist, oft-cited in economic thermodynamics, noted for for being an early commenter on the implications of the newly developing field of thermodynamics on economies viewed as physical systems theorized in the field of political economics.

Social | Phase transitions
In 1878, Engels, in his Anti-Duhring, a work in opposition to the ideas of German philosopher Eugen Durhing (1833-1921), invoked water metaphors when he likened the revolutionary transformation of a society (see: social phase) to the qualitative phase transformation of ice into water and water into steam. [13]

The term “dialectical materialism”, an extension in some way of historical materialism, e.g. to include the laws of thought, or something along these lines, was used in 1891 by Russian political theorists Georgi Plekhanov and in 1894 by Vladimir Lenin to describe Marx’s philosophy. [12]

Second law
Engels, supposedly, first became aware of Rudolf Clausius’ formulation of entropy, or of at least William Thomson’s 1862 heat death version of the second law, in 1869 as stated in a March 21st letter to Karl Marx: [8]

“In Germany the conversion of the natural forces, for instance, heat into mechanical energy, etc., has given rise to a very absurd theory—that the world is becoming steadily colder … and that, in the end, a moment will come when all life will be impossible. I am simply waiting for the moment when the clerics seize upon this theory.”

In his 1882 Dialectics of Nature, according to Jacques Monod, Engels, supposedly, was led to deny the second law. [9]

In an 1888 letter to Russian economist Nikolai Danielson, Engels expressed the view that: [1]

“The nineteenth century is the century of Darwin, of Mayer, Joule, and Clausius, of evolution and the transformation of energy.”

Podolinsky
In 1880, Ukrainian social-physicist Sergei Podolinsky wrote to Engels about an interest in the implications of thermodynamics for human economics. [16] In an article published in 1881, for instance, Podolinsky strove to reconcile the work-based theory of value with energy accounting by integrating economic cycles with natural cycles, amid the skepticism of Engels who deemed it: [4]

“It is totally impossible to try to express economic relationships in physical terms.”

Engels discussed Podolinsky’s views on economics and thermodynamics with German political economist Karl Marx who both, supposedly, took great importance to the first law, but were either scantly receptive or hostile to the second law. In fact, when Engels was first confronted with Podolinsky’s efforts to reconcile Marxism with thermodynamics, Engels was “uninterested”, and choose to ignore the problem. [5] Later, however, Engels told Marx in a letter of 1882 that: “What Podolinsky has completely forgotten is that the working man is not only a fixer of present solar energy, but more than that, a squanderer of past solar heat. The degree wastage of energy reserves, coal, minerals, forests, etc., you know only too well, more than I do.” [6]

Podolinsky communicated his opinions to Engels, on several occasions, that the socialist model was flawed because it assumed that scientific socialism would overcome all natural resource scarcities and enable unlimited material expansion. Podolinsky’s biophysical analysis led him to conclude that ultimate limits to economic growth lay not in the shackles of the relations of production, but in physical and ecological laws. [7]

Marx and Engels
In 1848, Engels together with Karl Marx produced The Communist Manifesto, the founding treatise on communism, a socialist theory posited to end capitalism and the systems which they perceived to be responsible for the exploitation of workers. After the death of Marx (1883), Engels edited the draft versions of the second and third volumes of Marx’s Capital, published in 1885 and 1894, respectively (volume one published by Marx in 1867).

As of 2008, there seems to be the general consensus that both Engels and Marx rejected the second law of thermodynamics; although via textual analysis, as argued by John Foster and Paul Burkett, it seems, Engels criticized not the second law, but rather the extrapolation of this to the heat death theory of the universe. [2]

Quotes | By
The following are quotes by Engels:

“One day we shall certainly ‘reduce’ thought experimentally to molecular and chemical motions in the brain.”

“If ever anybody dedicated his whole life to the ‘enthusiasm for truth and justice’, using this phrase in a good sense, it was Diderot.”

“The desire to re-import the thermodynamical category of ‘work’ back into economics would result in nothing but nonsense.”

“The whole of nature accessible to us forms a system, an interconnected totality of bodies ... In the fact that these bodies are interconnected is already included that they react on one another, and it is precisely this mutual reaction that constitutes motion.”