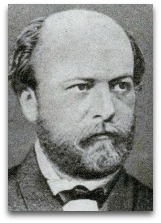 In existographies, Friedrich Lange (1828-1875) (CR:23), or "Frederick Lange" (Thomas, 1877), was a German philosopher, characterized as neo-Kantian and against but sympathetic to materialism (Russell, 1925), and sociologist noted for his 1865 The History of Materialism and Critique of its Present Importance, which was expanded into a two-volume second edition (1875), and translated into English as a three-volume set (1881), a work influential to John Tyndall and Friedrich Nietzsche, among others, wherein he recounts the history of materialism from Democritus and his atomic theory through Francis Bacon into Ludwig Buchner and his extreme materialism. [1]

Marx
German sociopolitical economic theorist Karl Marx, supposedly, gave a critique of Lange’s book that was more vehement than his critique of Buchner’s lectures. [2]
-
Quotes | Employed
The following are quotes employed by Lange:

Quotes | On
The following are quotes on Lange:

“In the 1860s the critical philosophy was rehabilitated chiefly as the handmaiden of the rapidly expanding natural sciences. Its task was to justify the logic of scientific discourse, and to curb the pretensions of metaphysics, whether they were the extravagancies of Schelling's and Hegel's Natural Philosophy or the crudities of Buchner's and Moleschott's materialism. Hermann Helmholtz, Eduard Zeller and Friedrich Lange—the first generation of neo-Kantians—saw the critical philosophy as little more than an epistemology of the natural sciences, and their interest in it scarcely extended beyond the first Kritik (criticism).”

Quotes | By
The following are quotes on Lange:

“With few great men of antiquity can history have dealt so despitefully as with [Democritus] Demokritos. In the distorted picture of unscientific tradition, almost nothing appears of him except the name of the " laughing philosopher," while figures of incomparably less importance extend themselves at full length. So much the more must we admire the tact with which Bacon, ordinarily no great hero in historical learning, chose exactly Demokritos out of all the philosophers of antiquity, and awarded him the premium for true investigation, whilst he considers Aristotle, the philosophical idol of the Middle Ages, only as the originator of an injurious appearance of knowledge, falsely so called, and of an empty philosophy of words.”

“History has but too frequently shown that if the educated men begin to laugh at the gods, or to resolve their existence into philosophical abstractions, immediately the half-educated masses, becoming unsteady and unquiet, seize upon every folly in order to exalt it into a religion.”

“Materialism gave the preference to mathematical and physical investigations - that is, those departments in which the human mind is first able to secure results of permanent value.”

“Democritus also mastered the whole extent of the science of his time, and that probably with greater independence and thoroughness than was the case with Aristotle; but we have no trace whatever of his having brought all these sciences under the yoke of his system..”