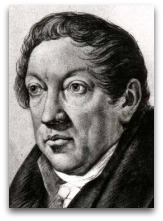 In human chemistry, Friedrich Riemer (1774-1845) was a German writer, librarian, and philologist, noted for being an associate of German polymath Johann Goethe who, along with Johann Eckermann, became the joint editor of the complete edition of Geothe’s works in 40 volumes (1839-1840).

Elective Affinities
In 1808, a year before the publication of Goethe's novella Elective Affinities, Goethe famously explained to Riemer that: ‘his idea for the new novella was to portray social relationships and their conflicts symbolically’, as in a, b, ac, abd, abcd, ab + c → ac + b, etc., and that: [1]

“The moral symbols used in the natural sciences were the elective affinities discovered and employed by the great Bergman.”

This comment in reference to symbols, refers directly to Swedish chemist Torbern Bergman's 1775 A Dissertation on Elective Attraction, which is based in part on Scottish physician and chemist William Cullen’s 1757 pioneering development of affinity reaction diagrams:

in which, for instance, as diagrammed above, if chemical species A and B are attached in a weakly bonded chemical union, signified by the bonding bracket “{“, ordered such that if species C were introduced into the system, the greater affinity preference of A for C would cause A to displace B and to thus form a new union with C, which equates to the following in modern terms:

In other words, what is moral or amoral, in Goethe’s view, is a point of view inherent in the laws of chemistry according to which species react.