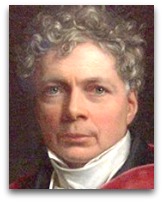 In existographies, Friedrich Schelling (1775-1854) (IQ:185|#82) (Cattell 1000:154) [RGM:106|1,500+] (CR:37) was a German philosopher, physicist, and panpsychist (Skrbina, 2005), noted for his circa 1796 natural philosophy theory, an attempt go beyond the mechanistic universe views of Rene Descartes and Newton and to go beyond the model of Immanuel Kant, all while aiming to bring all the sciences, human will and feelings, affinity, electricity, and magnetism, together into one unified theory; the theory, however, supposedly, ran amuck in a "mystery forces" language; aspects of the theory were said to have influenced Goethe, the theory was later rejected by the Helmholtz school.

“The abstract term ‘affinity’ is perfectly proper to describe the phenomenon [of combustion], but it is not adequate to explain it. Every verifiable explanation of it, however, would at the same time have to give us clues concerning the nature of what are called basic materials. The new system of chemistry, the work of a whole era, spreads its influence ever more widely over the other branches of natural science, and employed over its whole range may very well develop into the universal system of nature.”

He then steps though chapters on light and electricity, among others, at the end of which, according to a recent synopsis (1988):

“It stands in opposition to the Newtonian picture of matter as constituted by inert, impenetrable particles, and argues instead for matter as an equilibrium of active forces that engage in dynamic polar opposition to one another. In the revisions of 1803 Schelling incorporated this dialectical view into a neo-Platonic conception of an original unity divided upon itself.”

These "active forces" of Schelling, supposedly, were rejected as "mystery forces" by the Helmholtz school (below). What exactly constitutes the Schelling force, as compared to the Kantian force, however, seems to be a convoluted mess (Ѻ), to say the least.

On the World Soul
In 1798, Schelling, in his On the World Soul, outlined some type of “world soul” using strict natural scientific methodology as that of the physico-theologists (Ѻ), supposedly resulting in some type of quasi-divine theory of forces, baring exact reading; an attempt at tackling the problems raised by teleological causality in Kant’s Critique of Judgment and attempts to given an account of organic structure in nature in relation to a “supersensible ground of unity” (world soul) (Ѻ), or something to this effect.

“Goethe himself had however indicated in a letter of June 1809 to another of his friends, he had borrowed its title from a treaty of Swedish chemist Torbern Bergman published in Latin in 1775, De attractionibus electivis, and translated into German from 1782 under the title Die Wahlverwandtschaften, which is the title of the novel. The French translation of the Treaty of Bergman (1788) is called Treaty chymical elective affinity or attraction. Regardless of whether we actually read Goethe's book Bergman, where he became acquainted as a result of its trade with Schelling, which he had read in 1798 Ideas for a Philosophy of Nature published the previous year and the Soul of the World published the same year, works in which the professor of Jena, following Kant gave to chemical science a very important role, elective affinities expressed by him at a higher level the two forces fundamental attraction and repulsion. It is not impossible that Goethe had heard of "some ingenious pages on the application of elective affinities of chemistry elective affinities feelings" had written the Duchess of Bouillon, whose adopted daughter had married in 1795 Baron de Vitrolles that relates all this in his autobiographical Memories of a migrated. Gibelin, who reports this passage in an article in the Journal of Comparative Literature in 1953, notes that the Bouillon Duchess lived in Erfurt, but one of his friends went two or three times a month in Weimar, sometimes taking with Vitrolles him who claims to have had with Goethe and "very good conversation", which raises the possibility that he had informed the poet of the work of his stepmother.”

In 1797, after reading Schelling’s Ideas Towards a Philosophy of Nature, Goethe began conducting experiments with magnetics, to investigate how the notion of “polarity” connects the organic and the inorganic worlds. [2]

On 28 May 1798, Goethe met Friedrich Schelling for the first time, at his home, after which, according to Goethe’s diary, they spent the next two days performing optical experiments. [3]

Schelling was said to have been “quite enchanted” with Goethe’s 1809 Elective Affinities. [4]

Helmholtz school
The Helmholtz school, supposedly, was reaction against the ‘mystery force’ nature-philosophy school of thought, advocated by Schelling, supposedly, that led Johannes Muller to search for what actually happened during the process of “feeling”, the result of which he came up, in 1840, his law of specific nerve energies, according to which each organ when stimulated only gave rise to a specific sensation, ear to sound, eye to light, etc. Muller's concluding theory was that "the will sets in activity the nervous fibers, like the keys of a piano." [1]

Education
Schelling at 11 was enrolled in a class with boys of age 18 and 19 who recognized him as their equal in knowledge and ability. By age 20 he had outlined his philosophy. [5]

Other
Schelling was a friend of Georg Hegel in youth.

Quotes | On
The following are quotes on Schelling:

“With regard to the differences between the sexes, for instance, the most useful theory that has been put forward is the existence of a kind of polarity, two extremes separated by a multitude of intermediate conditions. The characterological differences appear to follow this rule in a fashion not dissimilar to the suggestion of the Pythagorean, Alcmaeon of Kroton, and recalling the recent chemical resurrection of Schelling's Natur-philosophie.”

Quotes | By
The following are quotes by Schelling:

“In all of us there dwells a secret marvelous power of freeing ourselves from the changes of time (see: flow state), of withdrawing to our secret selves away from external things, and of so discovering to ourselves the eternal in us in the form of unchangeability. This presentation of ourselves to ourselves is the most truly personal experience upon which depends everything that we know of the supra-sensual world. This presentation shows us for the first time what real existence is, whilst all else only appears to be. It differs from every presentation of the sense in its perfect freedom, whilst all other presentations are bound, being overweighted by the burden of the object. Still there exists for those who have not this perfect freedom of the inner sense some approach to it, experiences approaching it from which they may gain some faint idea of it. . . . This intellectual presentation occurs when we cease to be our own object, when, withdrawing into ourselves, the perceiving self merges in the self-perceived. At that moment we annihilate time and duration of time; we are no longer in time, but time, or rather eternity itself, is in us. The external world is no longer an object for us, but is lost in us.”

“I protest against that blind and thoughtless mode of investigating nature which has become generally established since that corruption of philosophy by Bacon and of physics by Boyle and Newton.”