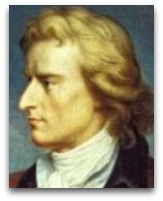 In existographies, Friedrich Schiller (1759-1805) (IQ:185|#69) (Cattell 1000:75) [RGM:85|1,260+] (CR:144) was a German "poet-philosopher", as Sigmund Freud (1930) describes him, noted for his intellectual kinship with German polyintellect Johann Goethe, with whom Goethe first began in 1799 to discuss his newly forming "human chemical theory" of the existence of physical chemistry based human elective affinities governing human relationships. [1]

“There is no trace of the delicate relationship (chemische verwandtschaft) through which they (his characters) attract and repel, neutralize each other, separate again and re-establish themselves.”

The openness, and without introduction of this quote, implies that Schiller and Goethe had previously interjected on this topic.

Schiller, somewhere along the line, supposedly, penned out a theory of the drives: [5]

"The animal drives [Triebe] awaken and develop the spiritual drives"; he opposed the material drive (Stofftrieb) to the form drive (Formtrieb). The Spieltrieb (play-drive)—which expresses play, the beautiful, freedom, and the total man—is posited as an ideal nexus between the two Triebe. It is also the force that drives creation: "It is union of the unconscious and reflection that makes the poetic artist."

In 1795, Schiller penned his poem "The World Ways", shown in the original German and English-to-German translate below:

In 1910, Austrian psychologist Sigmund Freud situated himself in Schiller's wake by distinguishing the sexual instincts from the ego instincts, and in his Civilization and its Discontents, stated that Schiller, with his hunger and love poem, had provided him with an initial "foothold" for his free energy and bound energy connected "drive theory" or libido energy (id, ego, superego) model of the "theory of instincts" of psychoanalysis from the final line of Schiller's 1795 poem, which according to the 1961 translation by James Strachey, Freud quotes as follows:

Two other versions, that may or may not have been derived from Schiller, are as follows:

“Hunger and love are two fundamental forces that reign in the living world, they are the primary source of all phenomena, mental and social.”

The popular modern truncated version of the conclusion of Schiller's poem is:

“Love and hunger rule the world.”

Einstein
As found in Einstein's personal library at Princeton, according to the 2008 views of German-born American physicist Gerald Holton, noted student of American thermodynamicist Percy Bridgman: [2]

“Throughout his life Einstein was a man of the book, to a much higher degree than other scientists. The remarkably diverse collection of volumes in his library grew constantly. If we look only at the German-language books published before 1910 that survived Einstein’s Princeton household, the list includes much of the cannon of the time: Boltzmann, Buchner, Friedrich Hebbel, the works of Heine in two editions, Helmholtz, von Humboldt, the many books of Kant, Gotthold Lessing, Mach, Nietzsche, and Schopenhauer. But what looms largest are the collected works of Johann von Goethe in a thirty-six volume edition and another of twelve volumes, plus two volumes on his Optics, the exchange of letters between Goethe and Schiller, and a separate volume of Faust.”

In other words, Einstein, supposing he had read all of the books in his library, would have known about the above comment by Goethe. It is thus puzzling why Einstein commented in the 1920s: [3]

“How on earth are you ever going to explain in terms of chemistry and physics so important a biological phenomenon as first love?”

Explanations on his statement are puzzling, if in fact Einstein had read the above 1799 comment of Goethe to Schiller as well as Goethe's Elective Affinities? It could be that Einstein, being so absorbed in his own work, relativity, although oddly his first 30 papers were in thermodynamics, may have not seen the trees between the forest (see: forest blind)?

Quotes | By
The following are noted Schiller quotes:

“Keep true to the dreams of your youth.”

“There is no such thing as chance; and what seem to us merest accident springs from the deepest source of destiny.”

“The relationship of gravity to the living power of the bird is about the same as inclination is related to law-giving reason.”

“I do not ignore the advantages which the present generation, regarded as a whole, and measured by reason, may boast over what was best in the bygone world; but it must enter the contest as a compact phalanx and measure itself as whole against whole. What individual modern could enter the lists, man against man, and contest the prize of manhood with an individual Athenian? When then arises this unfavorable individual comparison in the face of ever advantage from the standpoint of the race?”

References
1. (a) Lynch, Sandra. (2005). Philosophy and Friendship (Crebillon, pg. 37). Edinburgh University Press.
(b) Steer, Alfred G. (1990). Goethe’s Elective Affinities: the Robe of Nessus (Crebillon, pg. 37). Winter.
(c) Prosper Jolyot de Crebillon – Wikipedia.
2. Galison, Peter, Holton, Gerald J., and Schweber, Silvan S. (2008). Einstein for the 21st Century: His Legacy in Science, Art, and Modern Culture (ch. 1: Who Was Einstein? Why is He Still so Alive?, pgs 3-15; quote: pg. 10). Princeton University Press.
3. (a) Among the letters Einstein received in England was one from a man who had a theory that gravity meant that as the earth rotated people were sometimes upside down or horizontal. Perhaps, reasoned the man, this led people to do foolish things, like falling in love. This prompted Einstein to scribble on the letter: “falling in love is not the most stupid thing that people do … but gravitation cannot be held responsible for it.”
(b) Source: Isaacson, Walter. (2007). Einstein, (pg. 423). Simon and Schuster.
(c) In the late 1920s at the California Institute of Technology, as recorded by Henry Borsook (1956), physical chemist Edwin Cohn asked geneticist Thomas Morgan what is research plans were? Morgan answer was: “I am not doing any genetics. I am bored with genetics. But I am going out to Cal Tech where I hope it will be possible to bring physics and chemistry to bear on biology.” Shortly after Morgan arrived at Cal Tech, Einstein visited the laboratory and posed almost the same question. Morgan answered similarly as before. In response, Einstein shook his head and said: “No, this trick won’t work. The same trick does not work twice. How on earth are you ever going to explain in terms of chemistry and physics so important a biological phenomenon as first love?”
(d) Source: Kang, Manjit. (2002). Quantitative Genetics, Genomics, and Plant Breeding, (pg. 12). CABI Publishing.
4. Freud, Sigmund. (1930). Civilization and its Discontents (translator: James Strachey, 1961) (§6:, pg. 112). W.W. Norton & Company, 2005.
5. Schiller and Psychoanalysis – Gale Dictionary of Psychoanalysis.