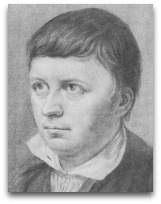 In existographies, Karl Wilhelm Friedrich Schlegel (1772-1829) (Cattell 1000:837) (CR:4), aka "Friedrich Schlegel", younger brother of August Wilhelm Schlegel (1767-1845) (Cattell 1000:705), aka “August Schlegel”, was poet and literary critic noted for his circa 1798 poetry and writings using what he believed was a kind of verbal chemical logic, thus producing a type of chemistry poetry, possibly akin to the poems of Mala Radhakrishnan, or a version of literature chemistry. [1]

Overview
In his poetic and linguistic productions, according to American comparative literature scholar Michel Chaouli, Schlegel never develops any sort of model or theory, but rather speaks endlessly on “saturation” and “condensation”, of “synthesis and analysis”, of “oxidation” and of “azote” (nitrogen), and above all of “eternally dividing and mixing forces”. [2]

In short, Schlegel’s chemistry poetry is a more dilettantish and chaotic way than as compared to the romantic chemical writings of German polyintellect Johann Goethe (1809), or other early German romanticism writers who had more than a passing knowledge of chemistry: Immanuel Kant, who knew it well, Friedrich Schelling, who lectured on it at length, Novalis, who studied it intensely, and Samuel Coleridge, who had a remarkable firm grasp of it. [2]

Quotes | On
The following are quotes on Schlegel:

“A pure physics must be completely divorced from mathematics; only then will it disclose the (poetic) view of nature.”