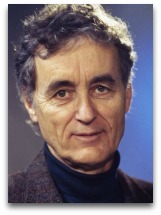 In existographies, Fritjof Capra (1939-) (CR:32) is an Austrian-born American physicist noted for the publication of his 1996 book The Web of Life, in which he outlines a view that the ordered formation and emergence of life is a type of emergent, self-organized, dissipative structure, formed similar to Bénard cell organizations. [1] Capra's thermodynamic or rather evolution thermodynamics logic is modeled on the thermodynamics of Belgian chemist Ilya Prigogine, both being types of ontic opening physics. [2]

Turning point | Mindwalk
The 1990 film Mindwalk (Ѻ), which Daniel Rigney calls "intellectually provocative", to note, is based on Capra’s 1982 book The Turning Point, which contains notable chapters on the Cartesian-Newtonian mechanistic models of life and economics, one noted scene being when the poet, politician, and physicist debate Cartesian reductionism while standing next to a large mechanical clock. [8] The film, supposedly, contains dialogues on systems theory, holism, quantum mechanics, and particle physics. [9]

The gist argument of Capra's book is nearly identical to that of Cuban-born American philosopher Alicia Juarrero's 1999 Dynamics in Action as well as American neurological anthropologist Terrence Deacon's 2011 Incomplete Nature: How Mind Emerged From Matter, all of which seem to well classify under the category of "non-reductive materialism emergence" theory. [5]

In 2002, in his symposium presentation “Complexity of Life”, Capra summarized the gist of this philosophical position as follows: [6]

“This spontaneous emergence of order at critical points of instability, which is often referred to simply as ‘emergence,’ is one of the hallmarks of life. It has been recognized as the dynamic origin of development, learning, and evolution. In other words, creativity—the generation of new forms—is a key property of all living systems.”

Likewise, in his 2002 The Hidden Connections, Capra employs the classic emergent property argument to make his point—a tool frequently used by emergentists: [7]

], the resulting compound has a sweet taste. The sweetness resides neither in the C, nor in the O, nor in the H; it resides in the pattern that emerges from their interaction. It is an emergent property. Moreover, strictly speaking, is not a property of the chemical bonds. It is a sensory experience that arises when the sugar molecules interact with the chemistry of our taste buds, which in turns causes a set of neurons to fire in a certain way. The experience of sweetness emerges from that neural activity.”

This, of course, is but a smoke and mirrors argument, generally done to give a scientific appearance to various arguments of the proposed existence of things, such as: mind, consciousness, life, mysticism (one of Capra's favorite terms), among others.

See main: What is life? (theories of existence)

In particular reference to the question “what is life?”, Capra states, on the terminology of Prigogine, that life a “far from thermodynamic equilibrium” system that has emerged, due to the flow of matter and energy, past the “bifurcation point”. [3] Capra, similar to Prigogine, uses a type of anthropomorphic thermodynamics in his description of molecular behavior. In his 1996 book, to cite on example, he states:

“Prigogine’s detailed analysis of Bénard cells showed that as the system moves farther away from equilibrium, it reaches a critical point of instability, at which the ordered hexagonal pattern emerges” and that, during convection, “heat is transferred by the coherent motion of large numbers of molecules.”

In short, Capra argues that life is a Prigoginean thermodynamics type of phenomenon.

Choice | Humans vs molecules
Capra, ignorant of the fact that humans are molecules (see: human molecule), posits the following backwards view in regards to human "choice" as compared to molecular "choice": [2]

Quotes | On
The following are quotes on Capra: