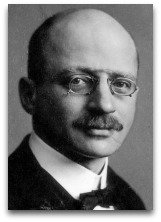 In existographies, Fritz Haber (1868-1934) (IQ:180|#129) (Becker 160:92) (GCE:30) [CR:61] was a German physical chemist noted for his pioneering 1905 work in gas reaction thermodynamics, wherein he formerly organized data on free energy, and for his later 1907 solving of the problem of ammonia synthesis, via the Haber process, namely how to the strongly bonded nitrogen molecule N2 to break apart, i.e. to break its triple bond (three covalent bonds), and to recombine with three hydrogen atoms, according to the following process:

which, in May 1909, working together with English technical engineer Robert Le Rossignol, they were able to achieve, in a process that produced 6 percent yield of ammonia NH3 at about 300°C and 200 atm pressure, using osmium as a catalyst, a feat par excellence of using thermodynamic prediction methodology to obtain desired products, at a given equilibrium state.

Education
In 1891, Haber competed his dissertation, at the University of Berlin, on chemical reactions involving piperonal, after attending the lectures of Hermann Helmholtz and studying in the laboratory of Robert Bunsen.

During this time, Haber met fellow student Richard Abegg, eventual discoverer of Abegg’s rule (1904), the forerunner to the Octet rule, as popularized by Gilbert Lewis, who introduced Haber to physical chemistry. Abegg and Haber both wrote to Wilhelm Ostwald, asking to join his laboratory in Leipzig, the then leading physical chemist in Germany. Abegg's application was accepted; Haber's wasn't. [5] Ironically, it was Haber who would go on to become one of the world's leading physical chemist.

Free energy
Haber's 1905 Thermodynamics of Technical Gas Reactions, according to American physical chemists Gilbert Lewis, was the first systematic study of all the thermodynamic data necessary for the calculation of the free energy of chemical substances in a group of important reactions. [1]

Nernst-Haber rivalry | Ammonia synthesis
In 1904, Haber received a request from the Austrian Chemical Works (Österreichische Chemische Werke), Vienna, to investigate the synthesis of ammonia from its elements. Haber, sometime shortly thereafter, discovered the 1884 work of William Ramsay and Sidney Young, who showed that passing a mixture of dry nitrogen and dry hydrogen through a heated glass tube containing iron filings produced some ammonia:

Building on this insight, Haber, together with his assistant Gabriel van Oort, used the 1884 van’t Hoff equation to predict the amount of ammonia in the equilibrium mixture at lower temperatures. The van't Hoff equation showed that relatively low temperatures favored the process. If the unreacted gases could be recycled, and if an appropriate catalyst could be developed, then the process might have potential. Haber, however, dismayed by their efforts, commented:

“From dull red heat upwards, no catalyst can produce more than a trace of ammonia under ordinary pressure. Even at greatly increased pressures, the position of equilibrium must remain unfavorable. To attain practical success with a catalyst at ordinary pressure, its temperature must be no higher than 300°C.”

This was 1905, at which point Haber temporarily abandoned his work on the ammonia synthesis problem.

Independently, German physical chemist Walther Nernst, at about this time, was working on his new heat theorem, and decided that Haber and van Oort’s 1905 results would be a good test for his theorem. Nernst found, however, that his new law (third law) conflicted with Haber and Oort’s experimentally-derived data, and so Nernst decided to investigate the reaction himself. Nernst decided to at 30-75 atm, reasoning that ammonia concentrations would be more accurately measureable.

In 1906, Nernst informed Haber of his experimental findings, and, supposedly, how they were at odds with Haber’s results.

In 1907, Nernst, supposedly, reported successful ammonia synthesis, becoming the first to synthesis ammonia under pressure. The debate spilled over into public statements that Haber’s work was error-filled. That year, Nernst published the following derisive comment: [12]

“It is that so little ammonia is formed in this state of equilibrium, compared with what Haber’s highly inaccurate numbers led us to assume. Because otherwise one might actually have considered it feasible to synthesize ammonia directly from hydrogen and nitrogen. Now the situation is much less favorable.”

In Mar 1909, spurred on by public derogation, Haber, working with Robert Le Rossignol, produced an 6 percent yield of ammonia at about 300°C and 200 atm pressure, using osmium as a catalyst; and by Jul 1909, began using uranium as a better catalyst, to obtain higher yields. Their apparatus, currently on display at the Deutsches Museum, Munich, is shown adjacent.


Haber showed the process, aka the Haber process, to Carl Bosch, who then scaled the process up to the industrial production level; the first so-called Haber-Bosch process plant becoming operation in 1913.

Haber was awarded the 1918 Nobel Prize in chemistry for this work.

Einstein
In 1811-1813, Haber travelled to Zurich to recruit the new physical science celebrity Albert Einstein to come to Berlin. The two, supposedly, became close friends; it was Haber, e.g., who played the role of mediator in the 1914 divorce between Einstein and his wife Mileva. [5] The following is an interesting thermal word laced communication from Einstein to Haber:

“I’m glad that your earlier love for the blond beast has cooled off a bit.”

The blond beast being reference to one of Friedrich Nietzsche’s writings on a “splendid blond beast” that prowls in the spirits of all the great nations, a kind of nation id, untamed and bent on conquest; a jab at Haber’s relinquished detachment to the German cause. [14]

Sackur
On 17 Dec 1914, Haber, and his two oldest friends of his institute, Gerhard Just and Otto Sackur, the latter author of Textbook on Thermochemistry and Thermodynamics (1912), stood together preparing to mix two chemicals in effort to make a gas warfare device. Someone then called for Haber to come to the mechanic’s shop. Just after Haber left the room, the test tube exploded maiming Just and killing (dereacting) Sackur. [5] Sackur’s textbook, to note, would go on to become the precursor textbook of soon-to-become famous University of California, Berkeley chemical and chemical engineering department, and the Lewis school of thermodynamics; Lewis’ 1923 Thermodynamics and the Free Energy of Chemical Substances, supplanting the former.

On 1-2 May 1915, Fritz' wife Clara Haber (Clara Immerwahr), shot herself in the heart with her husband's pistol. Official reports were that she did so over objections to her husband’s involvement in chemical gas warfare used against the French and Russians.

Alternatively, Hermann Lutke, a mechanic in Haber's institute, reported (1958), in a series of letters to a man hoping to write a biography on Haber, that late in the evening of May 1, Clara encountered her husband with Charlotte Nathan, a young business woman who ran Haber’s downtown club, in an “embarrassing situation”, realizing that the two were having an affair. [5] Haber, after his wife’s suicide, married Nathan in 1917, after which the couple had two children.

In 1946, their son Hermann took his own life and, shortly thereafter, Hermann’s oldest daughter did the same.

Quotes | On
The following are quotes on Haber:

“[Haber made] the most important contribution to the subject of predicting the course of a chemical reaction from a few characteristic constants (after the ill-starred attempt of Berthelot).”

“Haber lived the life of a modern Faust, willing to serve any master who could further his passion for knowledge and progress.”

Quotes | By
The following are quotes by Haber:

“It’s the same feeling that makes both of us dissatisfied—the urge to extricate oneself from the narrow surroundings; to abandon, at all costs, the harbor into which my father has withdrawn himself after arduously weathering the storms of life; to sail out into the limitless ocean of life and future, guided by no other star than by one’s own will and striving.”

“God and the universe, soul and consciousness, idealism, realism! I swim in a sea of formal dialectic and logic, unfortunately not with my former ease. More experienced swimmers have enticed me too often into the rapids and eddies.”

“Last but not least I have to be independent. I don’t want to be anyone’s assistant.”

“You have to see how the liquid ammonia is pouring out!”

“Woman are like butterflies to me. I admire their colors and glitter, but I get no further.”

Further reading
● Hager, Thomas. (2008). The Alchemy of Air: a Jewish Genius, a Doomed Tycoon, and the Scientific Discovery that Fed the World but Flued the Rise of Hitler (rev). Crown.