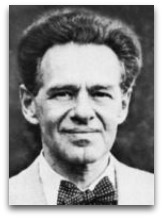 In existographies, Fritz Lipmann (1899-1986) (IQ:165|#450) (CR:62) was a German-born American physician and biochemist (CHNOPS-chemist) noted, in thermodynamics, for his 1941 bond energy coupling theory of how activity is powered thermodynamically inside of animate organisms.

Overview
In 1941, Lipmann, in his “Metabolic Generation and Utilization of Phosphate Bond Energy”, outlined his ideas on how bond energy were presented as embodied in the now-famous theory of the universal energy currency of phosphates and phosphate bond energy of ATP was presented. [1] The following is an opening excerpt:

“The recent recognition that in nature there occurs a widespread utilization of phosphate bonds as energy carriers, necessitates a still further revision of the earlier view concerning the biological significance of phosphate turn-over. During various metabolic processes phosphate is introduced into compounds not merely, or at least not solely, to facilitate their breakdown, but as a prospective carrier of energy. The outline of the metabolic generation and the circulation of this peculiar type of chemical energy is the primary purpose of this paper.”

In this work, Lipmann showed how the energy released from the high energy phosphate triple bond can be used to drive many energetically unfavorable biochemical reactions through a mechanism of “energetic coupling” (or free energy coupling). In this period, Lipmann was considered as one of the early experts on the subject of thermodynamics in relation to “energetic coupling” of phosphorylation and oxidation. [2] Out of this work, it is now know that an average person at rest hydrolyzes and produces some 40 kg of ATP per day. [6]

Lipmann’s theory of the generalized phosphate bond as a versatile energy distributing system stimulated his 1953 co-win of the Nobel Prize in Physiology or Medicine (along with Hans Krebs) for “his discovery of co-enzyme A and its importance for intermediary metabolism.” [9] In this sense, Lipmann’s work on energy metabolism acted to form an early basis for biochemical thermodynamics, where Co-A plays a central role. Protein elongation and tyrocidine synthesis, for example, are polymerizations that thermodynamically require energy of activation.

Lewis school
It seems that the theory of phosphate energy coupling has its basis in the Lewis school of thermodynamics. In particular, in developing his theories, Lipmann worked in close collaboration with Danish-born American biochemist Herman Kalckar, who was said to have been trained “in the orbit of the great G.N. Lewis school of thermodynamics”. Kalckar had previously (or simultaneously) showed that phosphate compounds could provide energy, by demonstrating that in frog muscles where glycolysis had been inhibited with iodoacetate, muscular contraction continued for a short period using phosphocreatine as a source of energy. [4] This suggested for the first time that phosphate compounds acted as a link between catabolism and anabolism. [5] Beyond this, reference number twenty to Lipmann’s paper is Lewis and Randal’s famous 1923 Thermodynamics and the Free Energy of Chemical Substances; and the symbols for the free energy equations in Lipmann’s paper are styled on those of Lewis’ notation.

Influences
Lipmann's work has been influential to American physicist Ronald Fox, in the development of his energy theory of evolution. [7] Lipmann's work on energy coupling was influential to American chemical engineer Libb Thims in his conceptual development of Gibbs free energy coupling in driving the connections of human chemical bonds, e.g. how powerful family bonds and associations can promote nepotism or drive weaker offspring reactions, that wouldn't normally go on their own. [8]

Quotes | On
The following are quotes on Lipmann:

“Two groups of important discoveries nourish the thinking of [post Lamarckian-Darwinian] biologists today. For the one part, the astonishing progress since Fritz Lipmann in the domain of bioenergetics and for the other, the impetus which thermodynamics has assumed under the fertile impulse of the genius of Prigogine. We are thus led to relegate the panoply of classic concepts as accessories and to re-think (see: unlearn) biological facts from the viewpoint of thermodynamics.”

“On the basis of his achievements, Lipmann was unquestionably, a biochemical genius. How these achievements were made, however, differ from the expected characteristics of a scientist of such stature. To begin with, he was either unwilling or unable to follow a complicated argument. It was not unusual for him to state that he could not follow the logic of a seminar or a personal conversation. When he wanted to understand a train of thought he asked question after question to get the speaker to make smaller and smaller steps between an observation and conclusion. As a result of this much closer scrutiny, Lipmann might find that a conclusion was untenable. I believe that this constant striving to simplify contributed to his success. His curiosity and desire to learn also prompted him to ask many questions of a general nature, that might seem elementary for a first year graduate student. This curiosity and enthusiasm never waned. After understanding the background of a problem, however, he was often able to make incisive comments or pose questions that helped to clarify ideas and concepts. Nearly everyone who came into contact with him held high regard for his scientific intuition. The source of this astuteness, however, might defy or transcend apparent logic. Lipmann wrote that he lacked the ability to make a good impression. Although he spent considerable time preparing for various symposium talks, he was not a gifted speaker. He was also ill at ease in answering questions after his seminars. After contemplating a question for several days (or months), he might formulate a new line of experimentation which went further than any implications that the questioner might have originally had in mind. Although his thought processes may have lacked speed, they certainly possessed undeniable power.”

Quotes | By
The following are quotes by Lipmann:

— Fritz Lipmann (1986), “last words” (age 87); stated while preparing a lecture to be delivered at the meeting of the Federal European Biochemical Society, Berlin [10]