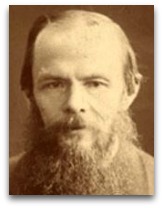 Influences
In the 1840s, Dostoyevsky, via the Petrashevsky Circle (Ѻ), came under the influence (Ѻ) of utopian social physics of Charles Fourier

Dostoyevsky read Henry Buckle’s History of Civilization in England (1861) twice; a book itself based on Adolphe Quetelet’s Essay on Social Physics. [7]

Underground man
In 1864, Dostoyevsky, in his Notes From the Underground, has his character the underground man imagine a scientist telling him:

“Nature doesn’t consult you; it doesn’t give a damn for you wishes or whether its laws please you or do not please you. You must accept it as it is.”

to which the underground man replies:

“Good god, what do I care about the laws of nature and arithmetic if for one reason or another, I don’t like these laws.”

“At its nuttiest extreme are those with holistics in their heads, those whose reaction to reductionism takes the form of a a belief in psychic energies, life forces that cannot be described in terms of the ordinary laws of inanimate nature.”

“The reductionist worldview is chilling and impersonal. It has to be accepted as it is, not because we like it, but because that is the way the world works.”

Crime and Punishment
In 1865, Dostoyevsky read Adolphe Quetelet’s social physics (1835) ideas, wherein Quetelet argues, based on statistical methods, that one could predict the percentage of the population that would murder, turn to prostitution, marry, divorce, commit suicide, etc., and thus in Quetelet’s ‘social physics’, crime is regarded as an unavoidable fact of life. [4] [N1]

In 1866, Dostoyevsky penned Crime and Punishment, wherein he incorporated the logic of Quetelet's social physics. [3]

In Crime and Punishment, the character Raskolnikov, specifically, is said to apply Quetelet’s social theory to the young women he meets on the street, reasoning that there is no point in helping her, since her fate had already been determined statistically by the laws of social physics. In this example, according to a review by Harold Bloom, Dostoevsky is said to be exemplifying “how the laws of social physics conflict with Christ’s commandment to love one’s neighbor.” (see: Bible vs. physical science conflicts) [4]

The following are selected end notes (Ѻ) from chapter 5 of the Literary Touchstone Edition of Crime and Punishment, showing some of the influences on Dostoyevsky, such as Charles Fourier, Newton, Kepler, Lycurgus, Solon, Napoleon, and ideas such as “the soul is reactionary”. 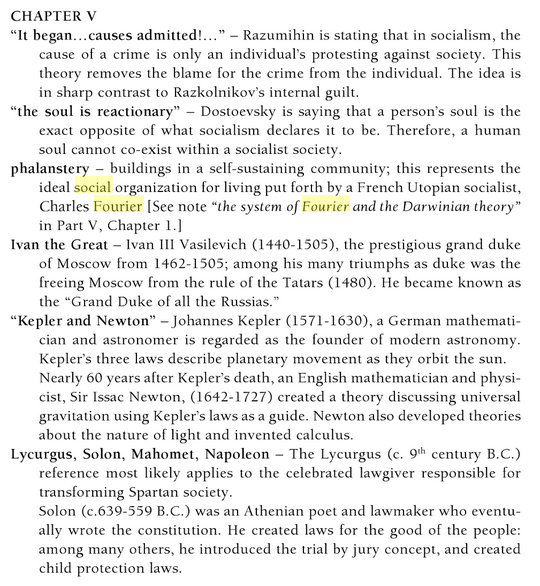 “If god does not exist, everything is permissible.”

This assertion, known as the Dostoyevsky dilemma, according to Jean-Paul Sartre (1945), is the starting point of existentialism. [2]

The "everything is permissible" assertion, for many, tends to equate to the logic that “no god = no immorality”, which translates to the belief that in a godless world there is no virtue, or something along these lines. (Ѻ)

Nihilism
Dostoyevsky’s 1872 novel The Possessed, according to French philosopher Albert Camus (Ѻ), is a prophecy about the devastating effects of nihilism.

Other
In genius rankings, Dostoyevsky has the eleventh highest “space allocation” ranking in 2002 western literature. [5]

Quotes | On
The following are quotes on Dostoyevsky:

“Dostoyevsky is the only psychologist from whom I have anything to learn.”

“Dostoyevsky gives me more than any scientist, more than Gauss.”

“Dostoyevsky wrote of the unconscious as if it were conscious; that is in reality the reason why his characters seem ‘pathological’, while they are only visualized more clearly than any other figures in imaginative literature. He was in the rank in which we set Dante, Shakespeare and Goethe.”

“Dostoyevsky lived a century and a hemisphere away from Walker Percy. During his early association with the Petrashevsky Circle (Ѻ), a group of intellectuals attracted to the utopian socialism of Charles Fourier and to Western European liberalism generally, Dostoyevsky wrote his first novel, Poor Folk, as a reformer with seemingly clear political intent. But he soon took a radically different course. After his 1849 arrest by tsarist authorities and subsequent imprisonment in Siberia, Dostoyevsky reclaimed his inherited Orthodox faith and mounted a vehement critique of modern Western ideologies in his major novels Crime and Punishment, The Idiot, The Possessed, and The Brothers Karamazov. Notes from Underground, published in 1864, ‘initiates the exploration of human separation from god’ that dominates these mature works." Furthermore, Notes arguably remains Dostoyevsky's ‘most profound statement of the human need for Christ’.”

Quotes | By
The following are related quotes by Dostoyevsky:

“Man—the meaning of man and of life—is a mystery: if you spend your entire life trying to puzzle it out, then do not say that you have wasted your time. I occupy myself with this mystery, because I want to be a man.”

“I want to say to you, about myself, that I am a child of this age, a child of unfaith and skepticism, and probably (indeed I know it) shall remain so to the end of my life. How dreadfully has it tormented me (and torments me even now) this longing for faith, which is all the stronger for the proofs I have against it. And yet god gives me sometimes moments of perfect peace; in such moments, I love and believe that I am loved; in such moments, I have formulated my creed, wherein all is clear and holy to me. This creed is extremely simple; here it is: I believe that there is nothing lovelier, deeper, more sympathetic, more rational, more manly, and more perfect than the savior; I say to myself with jealous love that not only is there no one else like Him, but that there could be no one. I would even say more: If anyone could prove to me that Christ is outside the truth, and if the truth really did exclude Christ, I should prefer to stay with Christ and not with truth.”

“You say, science itself will teach man that he does not really have either caprice or will of his own and that he has never had it, and that he himself is something like a piano key or an organ stop, and that, moreover, laws of nature exist in this world, so that everything he does is not done by his ‘will’ at all, but is done by itself, according to the laws of nature. Consequently, we have only to discover these laws of nature, and man will no longer be responsible for his actions and life will become exceedingly easy for him.”

“I could not become anything; neither good nor bad; neither a scoundrel nor an honest man; neither a hero nor an insect. And now I am eking out my days in my corner, taunting myself with the bitter and entirely useless consolation that an intelligent man cannot seriously become anything, that only a fool can become something.”

“Love in action is a harsh and dreadful thing compared with love in dreams.”

Notes
N1. In modern terms, to note, these unavoidable facts are quantified by the Lewis inequality for unnatural processes viewed in the context of thermodynamic coupling.