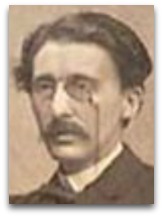 In existographies, Gabriel Tarde (1843-1904) (CR:6) was French sociologist and criminal psychologist, who is categorized with Auguste Comte, in theme, and Emile Durkheim, whom he debated with, who is noted, in hmolscience, for his 1893 Monadology and Sociology, wherein he applied Gottfried Leibniz’ one nature universal monad or monadology theory, intermixed with semi-modern chemistry and physics, to social theory and questions, according to which he conceived sociology as based on small psychological interactions among individuals—much as if it were chemistry—the fundamental forces being imitation and innovation.

“All forms of biological, social, and even physical battle terminate in victory for the stronger, called in biology survival of the fittest. This is as true for the competition of physical forces or chemical affinities as it is for the completion of species or nations—whence there follows a selection, alternately physical, biological, or social, whose main property is elimination or purification but not creation.”

Tarde elaborates on this as follows:

“What is the harmonious accord of two invisible movements produced by chemical combinations. Conversely, the clearest form of physical opposition is an impact, the encounter of two diametrically opposed movements on the same straight line. The sharpest form of biological opposition is murder in the most general sense of the term, which includes the suffocation of one plant by another or the destruction of a plant by an animal as well as a fatal duel between two animals. The most violent form of social opposition is war, which appears to be no more than the magnification of an animal duel but which basically differs greatly from the latter by the nature and precise awareness of its internal cause: the contradiction of judgments or the contrariness of the schemes involved.”

Influence
Tarde’s work, supposedly, has been influential to Sigmund Freud and Bruno Latour.

Quotes | Employed
The following are quotes cited by Tarde:

“Organic nature, as well as mineral nature, operates like human industry, by which I mean that it harmonizes irreconcilable effects in absolute geometry. These approximate arrangements yield different degrees and multiple solutions in series of crystals as well as in the series of living beings. This is also the necessary rule for human societies.”