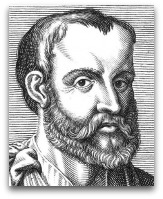 Quotes | On
The following are quotes on Galen:

“The handling of final causes, mixed with the rest in physical inquiries, hath intercepted the severe and diligent inquiry of all real and physical causes, and given men the occasion to stay upon these satisfactory and specious causes, to the great arrest and prejudice of further discovery. For this I find done not only by Plato, who ever anchoreth upon that shore, but by Aristotle, Galen, and others which do usually likewise fall upon these flats of discoursing causes. For to say that “the hairs of the eyelids are for a quickset and fence about the sight;” or that “the firmness of the skins and hides of living creatures is to defend them from the extremities of heat or cold;” or that “the bones are for the columns or beams, whereupon the frames of the bodies of living creatures are built;” or that “the leaves of trees are for protecting of the fruit;” or that “the clouds are for watering of the earth;” or that “the solidness of the earth is for the station and mansion of living creatures;” and the like, is well inquired and collected in metaphysic, but in physic they are impertinent. Nay, they are, indeed, but remoras and hindrances to stay and slug the ship from further sailing; and have brought this to pass, that the search of the physical causes hath been neglected and passed in silence. And, therefore, the natural philosophy of Democritus and some others, who did not suppose a mind or reason in the frame of things, but attributed the form thereof able to maintain itself to infinite essays or proofs of nature, which they term fortune, seemeth to me (as far as I can judge by the recital and fragments which remain unto us) in particularities of physical causes more real and better inquired than that of Aristotle and Plato.”

Quotes | By
The following are quotes by Galen:

“Employment is nature's physician and is essential to human happiness.”

“One could say that everything is ‘one’ in nature and in power, as Epicurus, Democritus, and their followers say of the atoms.”