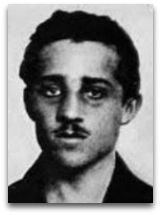 In hmolscience, Gavrilo Princip (1894-1918) was a Bosnian Serbian and member of the terrorist organization Black Hand who at the age of nineteen, sometime shortly before 11AM on June 28, 1914, shot and killed Austro-Hungarian Archduke Franz Ferdinand, an act which set off a chain reaction resulting in WWI and WWII, embroiling nearly the entire world, at the end of which, in 1945, thirty-one years later, 100 million casualties resulted. [1]

Human catalyst
American chemical engineer Scott Fogler, in his 1992 Elements of Chemical Reaction Engineering, argues that a person who starts a riot and then ducks out before things get violent would be an example of a human catalyst: [2]

“A catalyst is a substance that affects the rate of a reaction but emerges from the process unchanged. A man inciting a mob to riot and then ducking out before the tanks roll in can be regarded as a catalyst.”

In this sense, we might be inclined to think of Princip as the catalyst to the followup coupled reactions of the WWI reaction and the WWII reaction. A catalyst, however, in a typical sense, is considered as something that emerges from the process unchanged. Princip was, however, was captured and died four years later in prison.

“There is no need to carry me to another prison. My life is already ebbing away. I suggest that you nail me to a cross and burn me alive. My flaming body will be a torch to light my people on their path to freedom.”

— Gavrilo Princip (1914), said to prison warden on being moved to another prison (Ѻ)