; in c.800BC identified with the Greek gods Kronos or Gaia (Greek), depending; in c.500BC transliterated as Joseph (Hebrew), is, according to Heliopolis creation myth (Ennead), the Egyptian "earth god"; the son of Shu and Tefnut; male counterpart to the goddess Nut; father of Osiris, Isis, Set, and Nephthys. [1]

Overview
The following are two typical images of Geb, both images he is shown holding the was scepter (right hand) and ankh (left hand); in the right image he has a goose on his head: 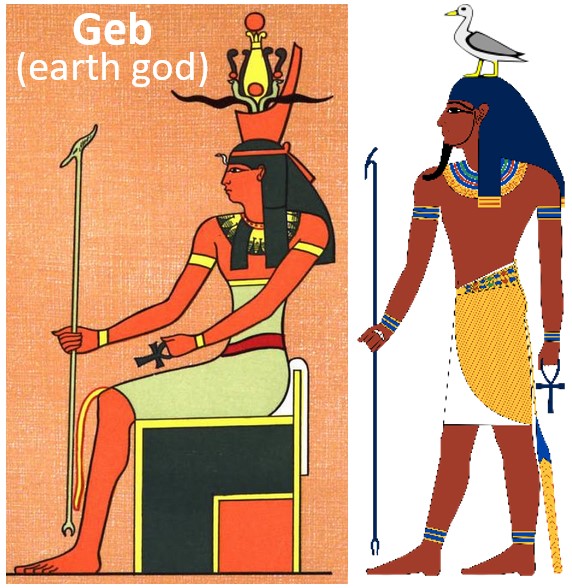 Greek mythology
In Greek mythology, via Homer (c.800BC), Hesiod (c.800BC), and Virgil (30BC), Geb was the forerunner to and or equated with the Greek god Kronos (Cronos), the father of Zeus, and or Gaia, the earth god, depending.

Jewish mythology
In Judaism, Geb was "god reduced" into the Biblical character of Joseph, i.e. "J- Seb" or god Geb, the step-father of Jesus, just as Geb was the mythical father to Osiris.

“Plutarch's version of the myth of Isis and Osiris connects the various episodes, many of which can be documented from Egyptian sources, into a single, running narrative (On Isis and Osiris, 12-19). The story be-gins with Kronos (Geb, the Egyptian earth god) and Rhea (Nut, the Egyptian sky goddess) overcoming the curse of Helios (Re, the sun god) with the help of Hermes (Thoth, the Egyptian moon god) by producing five children on five intercalary days: Osiris, Horus, Typhon (Set), Isis, and Nephthys. As pharaoh of Egypt, Osiris brings civilization to that country and to the whole world. Typhon, however, gathers conspirators and plots to kill Osiris. First, he imprisons Osiris within a coffin and throws it into the Nile River, and later he dismembers the body of Osiris and scatters the pieces all around Egypt. One piece, the penis, is lost forever in the Nile River. In both episodes, the reproductive power of Osiris is sub-merged in the Nile. (Isis grieving and searching for Osiris and burning away the mortality of the infant prince of Byblos can be compared with …”