In genius studies, genius and latitude refers to []

Overview
In 2003, Libb Thims, in his draft chapter sixteen "Entropy G[S] and Attraction III" of Human Thermodynamics, took the latitude and country location of 631 Nobel Prize laureates, and and ranked them according to "country population" divided by "laureates produced", along with fish, the main decahexanoic acid (DHA) source for the gray matter portion (memory), i.e. brain cells, of the brain, and beef and veal, the main oleic acid (OA) source for the white matter portion (thinking speed), i.e. myelin sheath, of the brain consumption per capita for each country, of 40 countries in total: [1] 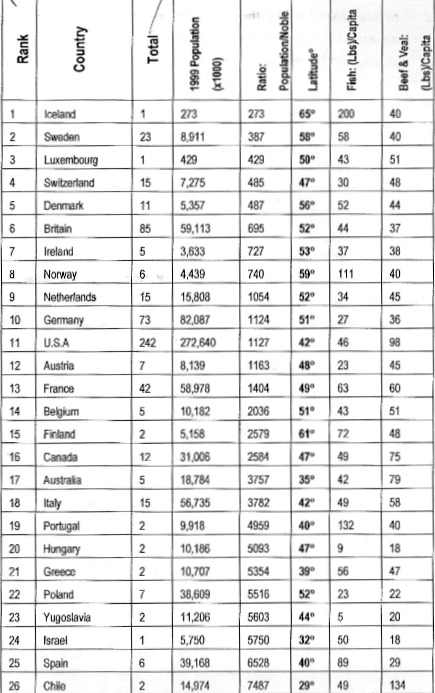 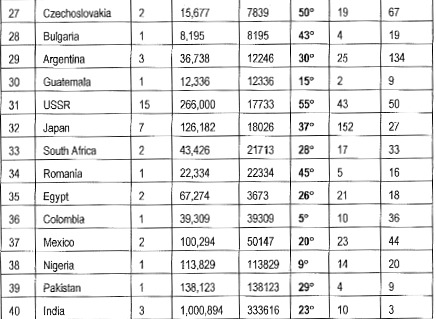 This analysis found, firstly, that the mean geographic latitude of all Nobel Prize winners is 46˚ degrees. Moreover, the top 10 highest Laureate per capita producing countries all were found to fall between 47˚ to 65˚ degrees in latitude. Thims, at this point, was summarizing this finding as follows:

Secondly, in respect to genius and diet, countries with low fish and meat consumption per capita, such as India, Pakistan, Romania, and Guatemala, all ranked in the bottom 25% of the 40 laureate producing countries.
Thirdly, those countries located close to either equatorial (0˚) latitudes, or the so-called "vacation latitude" (24˚), aka the "happy latitude". These Nobel laureate production rates tend to correlated to latitudes where annual sunshine hours are not too high (more than 3000-hours per year), where happiness levels tend to be higher, or too low (less than 1400-hours per year), wherein suicide rates tend to be higher. (Ѻ) In particular, the mean latitude for the top 20 countries with the highest suicide rates is 49˚ degrees, which by no coincidence is the mean latitude for thermodynamics founding schools (see: founders of thermodynamics and suicide), as summarized below; and the mean latitude for the top 20 countries with lowest suicide rate is 24˚ degrees. [1]
Thermodynamics schools
In 2010, Thims mapped out the founding schools of thermodynamics by degrees latitude, finding a mean latitude of 49.6˚, which is indicative of a potentially optimized latitude with which to learn thermodynamics:

Of note, the "Yale school", at New Haven, Connecticut, centered around the work of Willard Gibbs, which is not shown (per reason that while his impact was great, he did not per se found a school), is at 41.8˚ degrees.

42 degree | 46 degree rule?
Thims, in his 2003 chapter, also, of note, touched on the fact that the top schools of business, engineering, law, and medicine, in the US were in the 41° to 43° degree range, about which, talking into account the river and port location factors that led to these anchor point schools and cities, along with thoughts on Roman genius and how Rome's latitude is 42° and Greek genius, Greece having a mean latitude of 39° degrees, along with the intellect forming at Berkeley California, e.g. Lewis school and Silicon valley, 38°, etc., was discussing a "42±10° rule" or a 42 degree rule. As to whether or not the genius trend presently is a 42°±, 46°±, or 47°±, that is a matter of discussion, depending on what genius sample one is using. [2]

Other
Of note, relate to genius latitude, is the Pangaea theory, how the continents rise, come together, and separate over 300-million year periods; also how ice age periods change climate and habitat condition, e.g. supposedly about 7,000 years ago, large parts of what is now desert, near to Egypt, used to be plush and green, and most of Europe, about 10,000 years ago was covered by sheets of ice.
Quotes
The following are related quotes:

“Britons are too stupid to make good slaves.”