In genius studies, genius epochs are []

Overview
The following are the main types of genius confluences, grouped generally by nationality, era, or epoch, the rise and falls of which discernable via empire power size distributions with time on the histomap:

In 1894, James Cattell, in his methodological collection of the top 1000 biggest names of history (see: Cattell 1000), based on text size discussion devotion, of six biographical dictionaries and encyclopedias, two French, one German, and one American, discerned the following epoch peaks in respect to Greek genius and Roman genius: [1] Cattell also found the following number distributions from among his Cattell 1000 names: 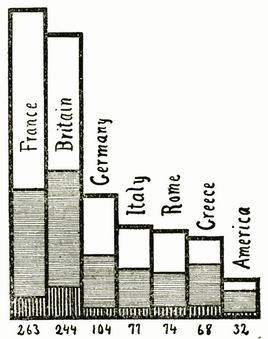 wherein we see that, as of 1894, French genius, English genius (or British genius), and German genius have relatively solidified, and past their peak, but that "American genius" was, at this point, and seemingly still is, an epoch yet to come into formation or fruition.

“The European, accustomed to the use of gunpowder, passes it by, without thinking much of its extraordinary energies; the workman, who labors to manufacture it, finds nothing marvelous in its properties, because he daily handles the matter that forms its composition. The American, to whom this powder was a stranger, who had never beheld its operation, looked upon it as a divine power, and its energies as supernatural. The uninformed, who are ignorant of the true cause of thunder, contemplate it as the instrument of divine vengeance. The experimental philosopher considers it as the effect of the electric matter, which, nevertheless, is itself a cause which he is very far from perfectly understanding.—It required the keen, the penetrating mind of a Franklin, to throw light on the nature of this subtle fluid—to develop the means by which its effects might be rendered harmless—to turn to useful purposes, a phenomenon that made the ignorant tremble—that filled their minds with terror, their hearts with dismay, as indicating the anger of the gods: impressed with this idea, they prostrated themselves, they sacrificed to Jupiter or Jehovah, to deprecate his wrath.”

References
1. Cattell, James McKeen. (1894). “A Statistical Study of Eminent Men”, statistics of paper presented to the American Psychological Association Dec.; abstract published in the Psychological Review, Mar., 1895; read in present form as a lecture before the Philosophical Club of Yale University, 1897; Popular Science Monthly (1903), 62: 359-77.
2. d’Holbach, Baron. (1770). The System of Nature: Laws of the Moral and Physical World (notes by Denis Diderot; translator: H.D. Robinson) (pg. 29). J.P. Mendum, 1889.
3. Brann, Noel L. (2001). The Debate Over the Origin of Genius During the Italian Renaissance: The Theories of Supernatural Frenzy and Natural Melancholy in Accord and in Conflict on the Threshold of the Scientific Revolution. Brill.
4. Watson, Peter. (2010). The German Genius: Europe’s Third Renaissance, the Second Scientific Revolution, and the Twentieth Century (Clausius, pgs. 234, 345-48, 479, 819, 854). Harper Perennial.