In genius studies, geniuses and sleep refers to the habits, rules, formulas of noted thinks, particularly those top 1000 geniuses.

Overview
Geniuses have always been particular about sleep, amount of sleep, and division of sleep, study in relation to sleep, among others. Italian genius Leonardo da Vinci is said to have utilized a "sleep formula", sleeping no more than four hours at a time, so to optimize his intellectual output. Several thinkers including Aristotle, Aristotle’s student Alexander the Great, and John Wilkinson (1728-1808) used the ball in hand sleep method, in which they would sleep with an iron or brass ball in their hand, which was held over an iron or brass jug, whereby if they stirred, typically owing to say a dream, they would wake up, and thus insure continued interruption to their slumbers, in some cases waking up to write down the thought or inspiration of their dream. [1]

Ichondras of Milletus (?) contrived a plane so narrow that he could not sleep on it except at full length, and of such an height and length as to insure his sliding down it in about six hours, at which point his feet would dip into a vase of cold water, thereby disturbing his rest. [2]

The following is an infographic (Ѻ) look at sleep patterns of a few geniuses: 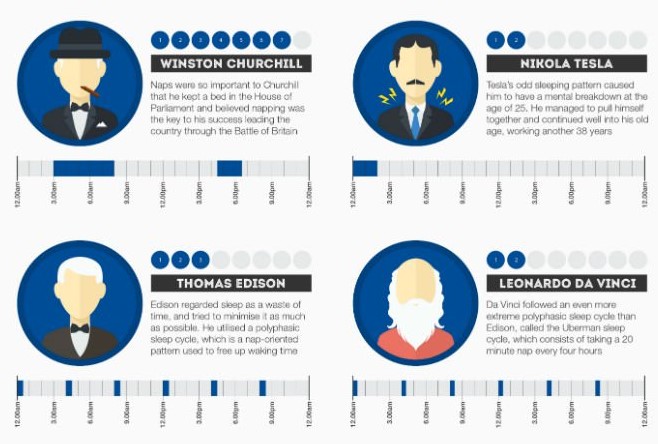 In the 1990s, Libb Thims used a two alarm system, with the day divided by two segments of sleep, being that dreaming and nightmares in particular are very effective for producing and processing effect knowledge assimilation, digestion, and consumption. Thims, in respect to alarm devices, devised a two-stage alarm system, wherein he had first alarm, and in times wherein sleep total amounted two four-hours (range) per day, he employed a second loud radio alarm that was locked in a box, with the key to the box placed off in a distant place, e.g. out in the car, so to be sure he was alert enough to get up during periods of intense sleep deprivation.

“May not genius be shown in arranging a man’s diet, exercise, sleep, reading, reflection, writing, etc., in the best order and proportion, for his improvement in knowledge?”

“Scientific investigations are a sort of warfare, carried on in the closet or on the couch against all one’s contemporaries and predecessors; I have often gained a single victory when I have been half asleep, but more frequently found, on being thoroughly awake, that the enemy had still the advantage of me when I thought I had him fast in a corner.”

— James Maxwell (c.1848), on being told (Ѻ) that students were required to attend a 5AM mass, on a certain day of the week