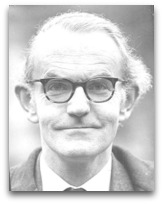 In existographies, Geoffrey Warnock (1923-1995) was an English philosopher, noted for []

Overview
In c.1958 to 1971, Warnock, somewhere in his works, supposedly, argued (Ѻ) that it is the role of ethics to offer an anti-entropic (see: entropy antonyms) response to order and structure in society, or something along these lines.

Quotes | On
The following are quotes on Warnock:

“Geoffrey Warnock argues that morality is linked with "the betterment—or non-deterioration—of the human predicament." According to Warnock, society has a natural tendency to get worse, an entropy of social relations. Because of limitations in resources, intelligence, knowledge, rationality, and sympathy, the social fabric tends to come apart, which as a result threatens to pro-duce a Hobbesian state of nature in which chaos reigns. Morality is antientropic. It opposes these limitations, especially by concentrating on expanding our sympathies.”