In affinity chemistry, Geoffroy’s affinity table is 16-column, 9-row affinity table, constructed in 1718 by French chemist Étienne Geoffroy, listing main bonding species on the top row, and the chemical species that it could possibly bond to in the column below listed in a descending order of chemical affinity strength. In other words, in the table, shown below, the lowest ranked affinity species, in the bottom row, have the least chemical affinity for the top species, meaning that the two could react and bond, but the strength or force of the bond would be marginal; whereas the species directly below (second row) each top row species, has the strongest chemical affinity towards that top row species, compared to all other possible chemical bonding partners.

The table works as prophetic sort of catalog of the various possible single elective affinities (single displacement reactions) possible between one bonded chemical entity and the various reactants that could be introduced with that bonded entity, so as to possibly cause displacement of the weakest partner.

Geoffroy’s table was the world’s first-ever affinity table. In the century to follow, dozens of other larger and larger affinity tables were made by various chemists, modeled on Geoffroy’s table, in attempts to catalog all known reactions. The largest table ever constructed was Bergman’s affinity table, 59-column, 55-row table made by Swedish chemist Torbern Bergman in 1775 and expanded on in 1785. Affinity tables would eventual be replaced with free energy tables, the first one, supposedly, made by German chemist Fritz Haber in his 1905 Thermodynamics of Technical Gas Phase Reactions, when it was noticed that chemical reactions are temperature dependent, and that the entropic energy (TS) comes into play, whereby one would have to make a big multipage affinity table, per each degree of temperature, which was an insurmountable task.

History
Geoffroy made his table during a translation into French of Newton’s newly published revised and updated 1717/18 English edition of Opticks, who used verbal descriptions of affinity gradients, as found in Query 31. [1] 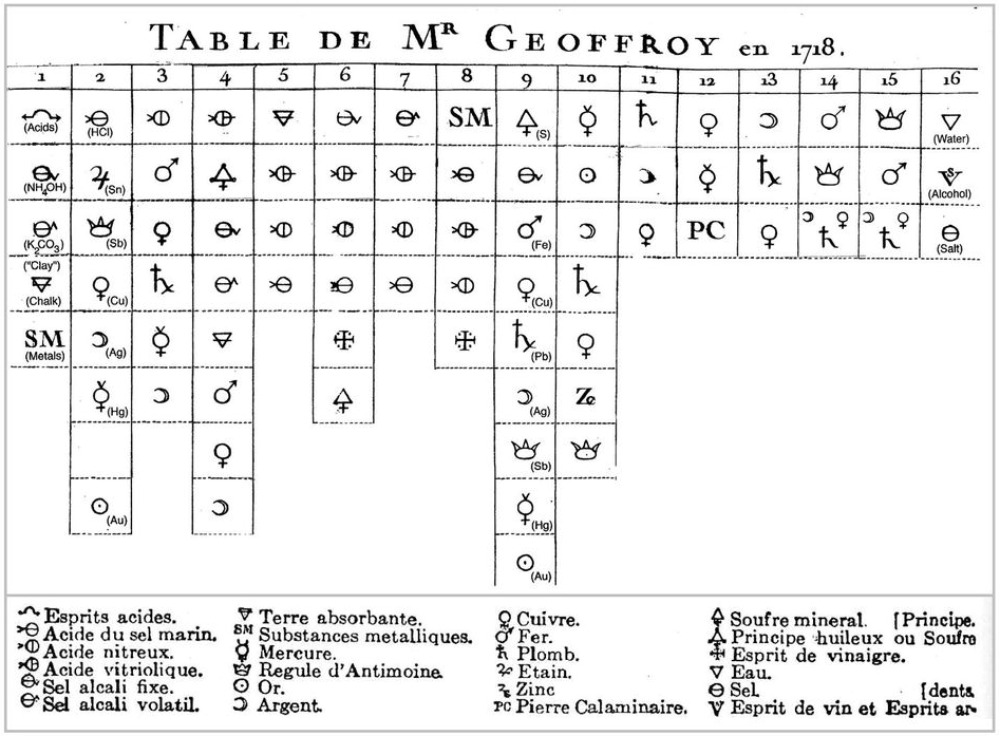