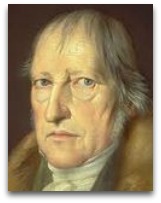 Overview
Hegel, supposedly, did work in affinity chemistry, being familiar with the work of Antoine Lavoisier, Claude Berthollet, writing at length on Torbern Bergman’s affinity notion, debating with Jacob Berzelius on the matter and even inventing his own formulation of chemical affinity around 1803, all supposedly later employed in some way in his philosophy of nature. [1]

In 1807, Hegel, in his Phenomenology of Mind, employed the concept of kraft (force).

Goethe | Schopenhauer
Hegel has some kind of association with Goethe and it remains to be discerned how the two may have influenced each other in respect to affinity theory.

Quotes | On
The following are quotes on Hegel:

“Philosophy, if one still wants to call it that, has had to sink lower and lower, until it finally reached the lowest level of abasement in the ministerial creature Hegel, who in order to smother again the ‘freedom of thought’, which Kant had struggled for and won, made of ‘philosophy’, the daughter of reason and the future mother of truth, a tool of state aims, obscurantism, and Protestant Jesuitism. In order to cover up the disgrace and at the same time to bring about the greatest possible stupefaction of minds, he drew over it a cloak of the emptiest word rubbish and silliest gallimathias that have ever been heard outside the insane asylum.”

“This question, namely: where scientific thought should link itself with the big questions, has occupied the minds of the most profound thinkers of all epochs and all nations, since time immemorial, from Thales to Hegel.”

“Hegel dominated philosophy in the period after Kant and introduced the idea of history as an unfolding self-revelation of the world spirit.”

Quotes | By
The following are quotes by Hegel:

“The first task of philosophy, is to conceive of absolute nothingness.”