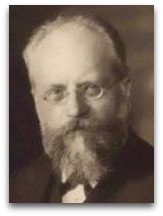 In 1887, Helm, in his The Doctrine of Energy, argued that the hypothesis of atomism was an unnecessary hypothesis and that the science of energy and entropy was all that was need to uniform physics; a book that contained an appended final chapter on the extension of the energy principle to social theory and economics, traversing the hierarchy of physical energy to vital energy to social energy. [1]

On the subject of economic thermodynamics, for instance, Helm postulated that money was the economic equivalent of the lowest form of "social entropy". In another sense, Helm, supposedly, was the first to argue that money constitutes the economic equivalent of "low entropy". This latter view, however, may have been a mis-translation by Romanian mathematician Nicholas Georgescu-Roegen. [5]

In 1898, Helm, in his Historical Development of Energetics, included a section on “Classical Thermodynamics”, arguing to the effect that thermodynamics had reached such a well-established state that “it can certainly be called ‘classical’”, hence the name classical thermodynamics. [6] Helm, supposedly, comments, however, that the label ‘classical’ had first been used not by him but by those who opposed all efforts to develop thermodynamics further. [7]

Ostwald
Helm’s work attracted the attention of German physical chemist Wilhelm Ostwald who adopted Helm’s precept that “in the last analysis everything that happens is nothing but changes in energy.” [3] This principle view, supposedly, was utilized by Ostwald, in his 1909 book Energetic Bases of Cultural Studies, to argue that the function of law, commerce, government, and language were the transformations of “crude” energy into “useful” energy with a minimum of waste. [4]