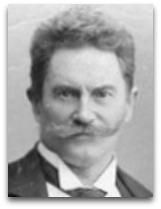 In hmolscience, Georg Hirth (1841-1916) was a German writer noted for his 1900 Entropy of the Germinal System and Hereditary Enfranchisement, wherein he attempts to tackle the problem of evolution genetics via thermodynamics, e.g. seemingly using human free energy theory, e.g. he has a section on human as a machine and discusses Helmholtz energy in the book, but done so with a tinge of mysticism, as Nicholas Georgescu-Roegen (1971) surmised.

Overview
In 1900, Hirth, in his Entropy of the Germinal System and Hereditary Enfranchisement, introduced the entropy antonym term “ektropy” to denote the principle that opposes the entropy principle of degradation in life-bearing structures. [1] In his work, Hirth speculated on the differences in the modes of energy between the sperm and egg, in the sense that the former represents kinetic energy and the latter potential energy. [4] The term ektropy, as introduced by Hirth, is said to refer to morphic order or generating order or form in ordinary space. [5]

The following is the partial table of contents of Hirth's Entropy of the Germinal System:

The following, to give a taste of Hirth's views, is an example translation of one of Hirth's eight mentions of the term Mensche (man) or "human", in this case Lord of man (pg. 145), i.e. god:


Hirth’s idea and terminology were taken up by German physicist Felix Auerbach in 1910 in the form of "ectropy". [3]

The majority of Hirth’s work, according to Romanian-born American mathematician and economist Nicholas Georgescu-Roegen, is said to be “pervaded by confusing mysticism”, attributed to the fact that Hirth was not a scientist by trade. [2]

Danish science historian Helge Kragh, in his history of entropy in religion, mentions Hirth in one footnote as follows: [6]

“The name ‘ectropy’ goes back to 1900, when it was introduced by Georg Hirth in the context of biological systems (Hirth, 1900). It became widely known through Felix Auerbach’s Extropismus oder die physikalische Lehre des Lebens (Leipzig, 1910). The mistaken view that the evolution of life forms contradicts the second law continued to play a role during the twentieth century, since the 1960s often in the context of new creationism. Local processes, such as the building up of complicated molecules from simpler ones, can occur even though they involve a decrease in entropy. Because the energy diminishes in such a way that the free energy is lower for the product, they are in full accord with the second law of thermodynamics. For an overview, see: Patterson (1983).”