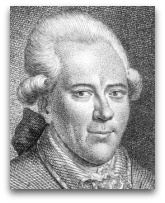 Overview
One of the first scientists to introduce experiments with apparatus in their lectures; associates with Goethe and Kant; Volta and Gauss sat in on his lectures; from 1765 (age 23) to 1799 (age 56), he kept a series of personal notebooks, quotations that struck Lichtenberg, titles of books to read, autobiographical sketches, and short or long reflections, including keen observations on human nature, à la the 17th-century French moralists, which gained him posthumous fame as one of the best aphorists in Western intellectual history; greatly influential to other later atheists, e.g. Schopenhauer (he is one of those who "think for their own instruction", who are "genuine 'thinkers for themselves' in both senses of the words"), Feuerbach (cites him in “The Natural Sciences and the Revolution”, 1850), Tolstoy (I’m perplexity "why the Germans of the present day neglect this writer so much"), Nietzsche, and Freud (who his “Why War?” letter to Albert Einstein) mentioned Lichtenberg's invention of a “Compass of Motives” in a discussion on the combination of human compounded motives and quoted him as saying, “The motives that lead us to do anything might be arranged like the thirty-two winds and might be given names on the same pattern: for instance, ‘food-food-fame’ or ‘fame-fame-food’,”); an enlightenment figure nonbeliever (Haught, 1996).

Quotes | By
The following are quotes by Lichtenberg:

“We are obliged to regard many of our original minds as crazy, at least until we have become as clever as they are.”

“I thank the lord a thousand times for having made me become an atheist.”

“It is almost impossible to bear the torch of truth through a crowd without singeing someone’s beard.”

“There is a sort of transcendental ventriloquy through which men can be made to believe that something which was said on earth came from heaven.”

“As nations improve, so do their gods.”

“After all, is our idea of god anything more than personified incomprehensibility?”

“Probably no invention came more easily to man than when he thought up heaven.”