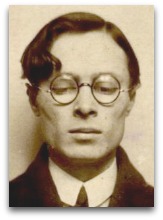 Overview
In 1978, Devereux published a 47-page chapter overview of his “Collected Works”, wherein he outlines some type of space-time model of people defined as “social mass” moving in a “social space” according to the laws of thermodynamics, give or take some peculiar ideas, along the way touching on things such as the Jeans-Donnan debate (1934). [1]

Education
In c.1928, Devereux, as a youth, studied chemistry and physics with Marie Curie in Paris. He was looking for ‘objective’ truth in physics and 'subjective' truth in music. In his later writings, he often referred to notions taken from the natural sciences.

In 1931, Devereux, at the Ecole des Langues Orientales, studied the Malay language, then studied under Marcel Mauss and Paul Rivet in anthropology, graduating from the Institute of Ethnology.

In 1936, Devereux completed his PhD at the University of California, Berkeley, under Alfred Kroeber.

In 1963, Devereux began to work with Claude Levi-Strauss, carefully studying his A World on the Wane (Tristes tropiques).

Quotes | By
The following are quotes by

“I next turn to the structure of ‘social space’, viewed as a gravitational field in which the concept of the ‘social mass’ of the individual plays a crucial role as a nucleus of attraction. The ‘social mass’ of an individual contributes to the structuring of the social space surrounding him. The ongoing relationship between two individuals can be analyzed via the transformation of systems of coordinates. This permits one to view society as a space so curved that for Y the least path will be that which passes near X. The ‘curvature’ of the social space can also be called customs or morals. I next consider stability and change in terms of the third law of thermodynamics and recall once more that all living systems, society included, are chronoholistic systems which must be described in integro-differential equations not reducible by any amount of differentiation to differential equations involving a ‘one point memory’; these equations must involve statistical macro-parameters. I conclude with the observation that sociological theory resembles an investigation of the ‘metrical’ properties of ‘social space’. The scheme presented here is compatible with any logically coherent sociological theory.”

“It seems probable that, for some time to come, psychological anthropology—and even all sciences of man—will have to face the inside/outside (object/observer) problem [see: advanced perspective] which has preoccupied me scientifically since 1931 and will have to come to terms with the distortions resulting from it. No matter how many new techniques we devise, it is unlikely that, in the foreseeable future, data will come to us as aseptically packaged as did, in the 1930s, certain food products proudly labelled ‘untouched by human hands’. For even the contents of such hypothetically uncontaminated fact-packages end up in someone's (contaminated) mind.”