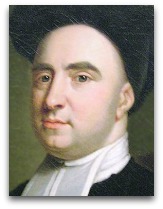 Moral attraction | Social gravity
In 1713, Berkeley published a 5-page essay entitled “Moral Attraction”, wherein he attempted to adapt Newtonian terminology to a psychological interpretation of social processes, via an earlier version of social gravitation theory; the following are noted excerpts: [1]

“Now, if we carry our thoughts from the corporeal [planetary] to the moral world, we may observe in the spirits or minds of men a like principle of [gravitational] attraction, whereby they are drawn together in communities, clubs, families, friendships, and all the various species of society.”

“The several great bodies which compose the solar system are kept from joining together at the common center of gravity by the rectilinear motions the author of nature has impressed on each of them; which, concurring with the attractive principle, form their respective orbits round the sun: upon the ceasing of which motions, the general law of gravitation that is now thwarted would show itself by drawing them all into one mass. After the same manner, in the parallel case of society, private passions and motions of the soul do often obstruct the operation of that benevolent uniting instinct implanted in human nature; which, notwithstanding, doth still exert, and will not fail to show itself when those obstructions are taken away.”

As to the nature of the soul, Berkeley has the following to say:

“The mutual gravitation of bodies cannot be explained any other way than by resolving it into the immediate operation of god, who never ceases to dispose and actuate his creatures in a manner suitable to their respective beings. So neither can that reciprocal attraction in the minds of men be accounted for by any other cause. It is not the result of education, law, or fashion; but is a principle originally engrafted in the very first formation of the soul by the author of our nature. And as the attractive power in bodies is the most universal principle which produceth innumerable effects, and is a key to explain the various phenomena of nature; so the corresponding social appetite in human souls is the great spring and source of moral actions. ”

The following seems to be Berkeley’s jab at utilitarianism theory:

“To the intention of the author of our being, who aims at the common good of his creatures, and as an indication of his will, hath implanted the seeds of mutual benevolence in our souls; the interest, because the good of the whole is inseparable from that of the parts; in promoting therefore the common good, everyone doth at the same time promote his own private interest.”

Sorokin
In 1928, Russian-born American sociologist Pitirim Sorokin, in his infamous “The Mechanistic School” chapter, of his Contemporary Sociological Theories, gave the following summary of Berkeley: [3]

“Along the lines of social physics of the seventeenth century George Berkeley constructed his theory of moral attraction and social stability. According to his ‘social physics’, physical gravitation has its analogue. The centrifugal forces are manifest in the form of egoism, which drives persons apart; while the social instincts correspond to the centripetal forces, because they draw persons together. Society is stable when the centripetal forces are greater than centrifugal. The role of physical mass in social mechanics is played by the population; the role of physical distance, by the homogeneity or heterogeneity of individuals.”

Sorokin, here, clearly reads Berkeley more than what he seems to have said.

In 1994, American science historian Bernard Cohen had the following sharp words to say about Sorokin’s review: [4]

“The eminent sociologist Pitirim Sorokin translated Berkeley’s correct Newtonian physics into a hodgepodge of incorrect pre-Newtonian explanations. Sorokin not only would have Berkeley make use of the misleading notion of a balance of centrifugal and centripetal forces, but continued his travesty by saying that Berkeley concluded that ‘society is stable when the centripetal forces are greater than the centrifugal’. This is plainly nonsense even in pre-Newtonian physics; if the centripetal forces should be greater than the centrifugal forces, then obviously there would be no stability but an instability, a lack of balance or equilibrium, and a result motion inward, as Berkeley clearly stated would be the case under such circumstances.”

Cohen, in any event, in his followup “Newton and the Social Sciences” chapter spends time discussing what he refers to as “Berkeley’s Newtonian sociology”, a term which seems but a stretch, given the terseness of Berkeley’s essay. [5]

Quotes | On
The following are quotes on Berkeley:

“But what shall be said of a Berkeley, who has endeavored to prove to man, that every thing in this world is nothing more than a chimerical illusion, and that the universe exists nowhere but in himself: that it has no identity but in his imagination; who has rendered the existence of all things problematical by the aid of sophisms, insolvable even to those who maintain the doctrine of the spirituality of the soul.”

Quotes | By
The following are quotes by Berkeley:

“That there is no such thing as what philosophers call material substance, I am seriously persuaded: but if I were made to see any thing absurd or skeptical in this, I should then have the same reason to renounce this, that I imagine I have now to reject the contrary opinion. Doth the reality of sensible things consist in being perceived? or, is it something distinct from their being perceived, and that bears no relation to the mind?”

“Few men think; yet all have opinions.”

“Truth is the cry of all, but the game of the few.”