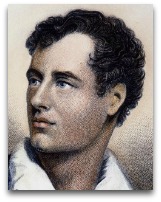 Elective affinities
In 1814, Byron, in some way, seems to have been a part of the Percy Shelley and Mary Shelley circle and their so-called “Church of Elective Affinities”, some of which Mary Shelley recounts as follows: [3]

“The results of this marriage were two children, a daughter and a son, and a separation. The circumstances of the disagreement between Shelley and his wife, have never been cleared up. Perhaps it would have been quite as noble if Shelley had continued the martyr of a youthful misstep instead of making his wife the victim of notions about marriage in which there is no evidence that she shared. However this may be, he made himself so acceptable to Miss Godwin, daughter of the novelist and Mary Wolstonecraft, that she consented to elope with him to Switzerland in July, 1814. They crossed to Calais in an open boat, not without danger of being lost. A Miss Claremont went with them. She also was a deaconess in the Church of the Elective Affinities, and (Lord Byron having joined the party) became the mother of the Allegra, mentioned in his will. This, however, seems to have been on a second visit to the Continent, the fugitives having in the meanwhile returned for a short time to England. This last continental tour occupied but a few months, during which the northern part of Italy was visited.”

In 1993, Tom Stoppard, in his play Arcadia compares Byron, in a way, to Goethe and his Elective Affinities, intermixed with heat, sex, the second law, and the “attraction that Newton left out”, i.e. chemical affinity and or human chemical affinity.

Lovelace
Byron’s daughter Ada Lovelace (1815-1852) (IQ:175), herself a Ranker greatest mind (#415|1,123) and smartest woman ever (#18), owing to her mother’s idea that education would root out any insanity associated with her father’s side, was raised as an accelerated child prodigy / forced prodigy, so to say, and was taught mathematics and science from some of the world’s leading scholars, including Mary Somerville; and in 1842, wrote the world’s first computer program, and algorithm for calculating a sequence of Bernoulli numbers with Charles Babbage’s analytical engine.

Quotes | On
The following are Byron related quotes:

“You are right; we must speak with respect of Lucretius; I see no one who can compare with him except Byron, and Byron has not his gravity nor the sincerity of his sadness. The melancholy of the ancients seems to me more profound than that of the moderns, who all more or less presuppose an immortality on the yonder side of the black hole. But for the ancients this black hole has the infinite itself; the procession of their dreams is imaged against a background of immutable ebony. The gods being no more and Christ not being not yet, there was between Cicero and Marcus Aurelius a unique moment in which man stood alone. Nowhere else do I find this grandeur; but what renders Lucretius intolerable is his physics, which he gives as if positive. If he is weak, it is because he did not doubt enough; he wished to explain, to arrive at a conclusion!”

“Those who will not reason are bigots, those who cannot are fools, and those who dare not are slaves.”

“Adversity is the path to truth.”

“There is something of a pagan in me that I cannot shake off. In short, I deny nothing, but doubt everything.”

“There are four questions of value in life. What is scared? Of what is the ‘spirit’ made of? What is worth living for and what is worth dying for? The answer to each is the same. Only love.”

“The great object of life is sensation—to feel that we exist, even though in pain.”