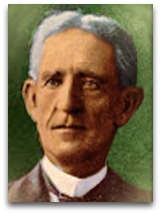 In hmolscience, George Carey (1845-1924) was an American physician known, particularly in human chemistry, for the 1919 publication of his The Chemistry of Human Life in which he set forth the view that: [1]

“Man’s body is a chemical formula in operation and there can be but one law of chemical operation in vegetable or animal organisms.”

It would by another eighty-one-years (2000) before the first calculation of this formula would be made by American limnologists Robert Sterner and James Elser. [2]

Carey's person as a "chemical formula in operation view" was a precursor book to the modern science of human chemistry, according to which the human being is a twenty-six element molecule (a human molecule) no different than any other molecule in the universe.

Overview
A significant turning-point thinker in the history of the human molecule concept was American physician George Carey who, in his 1919 book The Chemistry of Human Life, made an attempt to integrate biochemistry with chemical affinity logic along with knowledge of active elements into a synthesis of a chemistry of the human being. Although his work is detracted a bit by religious and other mineral elixir types of healing remedies, he does outline a few gems. In a truncated opening quote, for instance, Carey points to the idea that: [3]

“The human organism is an intelligent entity that works under the guidance which man has designated as chemical affinity.”

This seems to be an example of the external force model of human movement. Carey goes on to state that the human body is a storage battery that must be supplied with the proper elements—chemicals—to set up motion at a rate that will produce what we please to call a live body. In commentary on how the laws of chemistry apply universally, he states:

“There can be but one law of chemical operation in vegetable or animal organisms. When man understands and cooperates with that life chemistry, he will have solved the problem of physical existence.”

The most interesting point in his book is his statement that:

“Man’s body is a chemical formula in operation”

It would be eighty-one years before Sterner and Elser would actually make an attempt at calculating this formula. And the addendum ‘in operation’ is a huge topic not yet even begun to be simplified, e.g. as exemplified the fact that human molecules have 98 percent annual atomic turnover rate, whereas other molecules, such as H20, do not seem to have such a turnover rate.