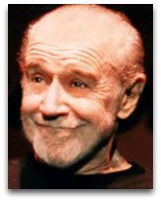 In philosophy, George Carlin (1937-2008) was an American stand-up comedian noted for his 1992 “entropy fan” skit, wherein he defines himself as a fan of entropy, and for his 1999 "god skit", wherein he makes a parody of religion as but a bit bullsh*t story. [1]

Entropy
In 1992, Carlin gave the following routine in one of his stand-ups: [2]

“I'm a bit perverted, but it amuses me that no one can really trust the water anymore. And the thing I like about it the most is, it means the system is beginning to collapse, and everything is slowly breaking down. I enjoy chaos and disorder, not just because they help me professionally, they're also my hobby, you see, I'm an entropy fan. I'm an entropy fan, when I first heard of entropy in high school science I was attracted to it immediately. When they told me that in nature all systems are breaking down, I thought what a good thing, what a good thing, perhaps I can make some small contribution in this area myself.

And of course it's not just in nature, in this country, the whole social structure just beginning to collapse, you watch, just beginning now to come apart at the edges and the seams. And the thing I like about that, is that it means it makes the news on television more interesting,... The planet will be here for a long, long, long time after we're gone, and it will heal itself, it will cleanse itself, cause that's what it does. It's a self correcting system..." The decay and disintegration of this culture is astonishingly amusing if you are emotionally detached from it... I sincerely believe that if you think there's a solution, you're part of the problem. My motto: Fu*% Hope!”

Religion | Atheism
In 1999, Carlin, in atheism circles, did his famous so-called "god skit" on religion: [3]

“When it comes to bullsh*t, big-time, major league bullsh*t, you have to stand in awe of the all-time champion of false promises and exaggerated claims, religion. No contest. No contest. Religion. Religion easily has the greatest bullsh*t story ever told. Think about it. Religion has actually convinced people that there's an invisible man living in the sky who watches everything you do, every minute of every day. And the invisible man has a special list of ten things he does not want you to do. And if you do any of these ten things, he has a special place, full of fire and smoke and burning and torture and anguish, where he will send you to live and suffer and burn and choke and scream and cry forever and ever 'til the end of time! But He loves you. He loves you, and He needs money! He always needs money! He's all-powerful, all-perfect, all-knowing, and all-wise, somehow just can't handle money! Religion takes in billions of dollars, they pay no taxes, and they always need a little more. Now, you talk about a good bullsh*t story. Holy sh*t! ”

“Religion is like drugs, it destroys the thinking mind.”