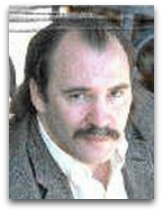 In hmolscience, George Effinger (1947-2002) was an American writer noted, in literature thermodynamics, for his 1972 religio-mythology thick book What Entropy Means to Me.

Overview
In 1972, Effinger, in his science fiction novel What Entropy Means to Me, employs an end section called a “well of entropy”, described like a black hole into which all matter fall, electrons stop spinning, becoming more dissociated, tending to the primal chaotic state of randomly distributed energy.

This narrative concept (a spin on black hole entropy), seems to trace to American theoretical physicist John Wheeler's 1971 comment to Mexican-born Jewish physicist Jacob Bekenstein that black holes seem to flout the second law of thermodynamics and to Bekenstein's 1972 solution to this issue that black holes should have a well-defined entropy. [2]

In his novel, Effinger contrasts the Well with “the River”, the symbol and essence of divinity on the planet they are found. He proclaims that God is the ultimate order, the embodiment of organization, and that the River and the Well are two poles of existence; wherein that the River has its source in the Well, making the cycle complete.

Effinger’s book, according to one review, presents a story thick with religious and mythological significance. [3]

Education
Effinger attended Yale University, but was dissuaded by an organic chemistry course in his aims to become a doctor. [1]