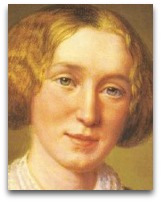 In existographies, George Eliot (1819-1880) (IQ:175|#232) [RGM:212|1,500+] (GFG:4) (SWE:3) (CR:34), born "Mary Ann Evans" or "Marian Evans" (Hecht, 2003), was an English realism philosopher and novelist noted, in human chemistry, for her 1872 novel Middlemarch, described by those including Martin Amis and Julian Barnes as the “greatest novel” in the English language, a novel which was modeled on German polymath Johann Goethe’s 1809 physical chemistry based novella Elective Affinities (Die Wahlverwandtschaften), which explained reality according to the science and principles of physical chemistry, according to which humans are large types of evolved chemical entities whose reactions are governed by the principles of affinity chemistry, in Elliot and Goethe's day, or the laws and principles of chemical thermodynamics, modern days.

Translations
In the early 1840s, Eliot has openly renounced Christianity, and thereafter translated David Strauss' Life of Jesus and Ludwig Feuerbach's Essence of Christianity; the latter was the only book she ever published in her own name. [8]

“Eliot greatly admired Die Wahlverwandtschaften, but she first read it in her twenties and continued thinking about German literature for another thirty years.It would be very difficult to recover what she thought of this work as her ideas developed during this period. She did not have a single view of this work.”

From 1854 to 1855, Eliot spent eight months in Germany, a period that marked the start of her existence with English philosopher and literary critic George Lewes (1817-1878), known for his 1855 prose literature book The Life of Goethe, in which he, supposedly, analyzed Goethe’s Elective Affinities. Though Eliot documented this journey more extensively than any other, it has remained an under-researched part of Eliot's biography.

In the 2006 book George Eliot in Germany, 1854-55: Cherished Memories, Roder-Bolton draws on Eliot's own writings, as well as on extensive original research in German archives and libraries, to provide the most thorough account yet published of the couple's visit. Rich in historical, social, and cultural detail, the book not only records the couple's travels but also supplies a context for their encounters with people and places; and in which Roder-Bolton shows how the crossing of geographical boundaries may be read as symbolic of Eliot's transition from single woman to social outcast and from translator and critic to writer of fiction. Roder-Bolton states that by the end of this trip, Eliot had read every published word by Goethe.

Eliot, at one point, she took a three-month pilgrimage to Goethe's home town of Weimar.

Stahr | Goethe
On late 1854, as noted by Roder-Bolton, Eliot had a disagreement with German writer and literary historian Adolf Stahr (1805-1876) about the dénouement of Goethe's Die Wahlverwandtschaften. [3] Specifically, on 29 Dec 1854 Eliot recorded the following in her journal: [7]

“Friday 29. A fine frosty morning. Wrote to Noel and to my Sister. Worked a little at Spinoza but not well enough to do much . Read a little of Scherr. Read aloud Heine’s Salon. Then we went to Prof. Stahr’s house and spent the evening there. A remarkable miniature of Schiller of which there is not engraving. We talked of the Wahlberwandschaften, amongst other things. Stahr finding fault with the dénouement which I defended. (Concession or license).”

Stahr argued that it was wrong, while Eliot defended Goethe. [2] The issue was important enough for her to enlarge on it in her “Recollections on Berlin”, where she insisted that Goethe’s ending truthfully followed from the characters of the individuals in the work. Goethe’s Elective Affinities, from this point forward, is said to have had a significant influence on Eliot’s work and realism philosophy.

Middlemarch
In 1872, Eliot, building on realism literature model of Goethe's published the novel Middlemarch, wherein, according to Carl Krockel (2007), she "systematically elaborates on what Goethe only suggests in Die Wahlverwandtschaften, since each of her four characters is also bound to wider social relationships through affinity". The following, as highlighted by Tweeter (Ѻ) poster Zach Fruit (2016), points out a key connecting point between the two works:

In the passage highlighted, Goethe, as adopted by Eliot, exposes the view that just as is the case when two chemicals in the laboratory are put in contact that it is impossible to say which of the two chemicals triggered the reaction between the two, so it is the case for humans reacting in love the chemical reaction. In modern terms, one can state that the exchange force operates between the two atomic bound state bodies in question, chemicals or human, and that it is the exchange of bosons that triggers or forces the mechanism of the micro-movements. In simpler terms, in respect to the belief in love at first sight, one of the pair, according to studies, must be in the state of mind of wanting or ready to fall in love, according to which the "sight" (light reflection) of the desired object first triggers the said human chemical reaction.

In 2007, English German-cultures scholar Carl Krockel, in his PhD dissertation “D.H. Lawrence and Germany: the Politics of Influence” turned book, summarized the Goethe-Eliot connection as follows: [4]

“German culture played a dominate role in George Eliot’s life, beginning with her shift from Evangelicism to free-thought when she studied German historical criticism of the Bible in the 1840s. Her lover George Lewes acknowledge her contribution to his analysis of Die Wahlverwandtschaften in his pioneering biography of Goethe and The Mill on the Floss shares similar scenes to those in Goethe’s novel. George Eliot may be thinking about Die Wahlverwandtschaften in parts of her 1855 article ‘The Morality of Wilhelm Meister’, where she describes how Goethe ‘quietly follows the steam of fact and of life; and waits patiently for the moral processes of nature as we all do for her maternal process.’ George Eliot’s appraisal of Goethe as ‘the man who helps us to raise to a lofty point of observation, so that we may see things in their relative proportions’ [see: advanced perspective] is comparable to Georg Lukacs’s characterization of Goethe’s ‘consistently thought-out systemization of these relationships, contrasts and nuances, and his ability to transform all these features into a vivid plot with can characterize them’. For Lukacs, in the plot of Die Wahlverwandtschaften Goethe comes closest to the designs of the nineteenth-century realist novel, of which Middlemarch is the supreme example.

The chemical theory is the structural backbone of Goethe and George Eliot’s realism. Chemicals are only electively affined when their attraction excludes other chemicals. In his narrative Goethe uses the framework of two pairs of lovers, whose attraction to different aspects of each other reveals their psychological ‘properties’. Eduard and Charlotte are married, having known each other since childhood; the Hauptmann arrives, and links up with Eduard in their horticultural plans while excluding Charlotte for being too fanciful. Charlotte is satisfied by the arrival of the childlike Ottilie, and is also finding her own measured nature in affinity with the Hauptmann’s. Meanwhile, Ottilie appeals to Eduard’s childlike side, but the Hauptmann finds her ideas disturbing. And so the narrative continues.

In Middlemarch George Eliot systematically elaborates on what Goethe only suggests in Die Wahlverwandtschaften, since each of her four characters is also bound to wider social relationships through affinity.”

Interestingly, Krockel also notes that English novelist and literary critic D.H. Lawrence (1885-1930) was “certainly aware of Goethe’s theory of affinities, if only through reading of Ernst Haeckel’s account of it in The Riddle of the Universe” and argues that Haeckel’s pantheism helped Lawrence break from his Christian upbringing, for a monism based on the material universe. The Lukacs work mentioned above, to note, seems to be his 1968 Goethe and His Age.

Education
Eliot was well educated and well connected. Through a social connection, she obtained a position as assistant editor of the Westminster Review, a rather shocking achievement for a woman at that time, and one which allowed her to become acquainted with London’s literary crowd. Among that crowd was George Lewes, who encouraged Eliot to begin writing fiction in additional to poetry. And write fiction, she did—becoming one of England’s most revered and prolific novelists

Eliot was said to have been able to read and absorb 40 books per month; which, using the conservative estimate that she began reading at that rate at age 10, would indicate that she had read over 24,000+ books in her existence; in her time, she acquired the epitaph of “very wise woman” and also was measured by a phrenologist as having “very large brain”. [1]

American 19th century literature scholar Peter Dale, in his 1989 In Pursuit of a Scientific Culture, devotes a chapter or two to Eliot’s interest in ‘higher physics’. [5]

“The quickest of us walk around well-wadded with stupidity.”

“Goethe was the last true polymath to walk the earth.”