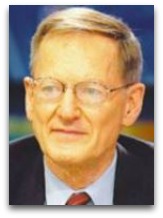 In hmolscience, George F. Gilder (1939-) is an American writer noted, in economic thermodynamics, for his 1981 to 2006 anti-reductionism publications, aimed to substantiating religious views over that of scientific views in economics.

Overview
In 1981, Gilder, in his million-copy best seller Wealth and Poverty, penned a last chapter discussion on how the second law or “entropy theory” is only a metaphor and that when applied to the economics of human activity is not to be concerned with. [1] Gilder seems to rely heavily on information theory to justify his suppositions and suggestions. The following is an example quote: [2]

“Gone is the view of a thermodynamic world economy, dominated by natural resources being turned into entropy and waste by human extraction and use … the key fact of knowledge is that it is anti-entropic: it accumulates and compounds as it is used … Concerning the microcosm, the mind transcends every entropic trap and overthrows matter itself.”

In his 1990 book Microcosm: the Quantum Revolution in Economics and Technology he has a chapter on the Curve of Declining Entropy. [3] In his 2000 book Telecosm: How Infinite Bandwidth will Revolutionize Our World, uses the information theory work of Claude Shannon to argue, in short, that:

“Through learning, civilization defies the thermodynamic laws of decline and fall.”

In 2006, Gilder, in his "Evolution and Me", gave a summary of how evolution could never have arisen from chemical processes because of Claude Shannon's 1948 information theory. The following excerpt is the meat of his argument, which has to one of the most inane and incoherent convolutions of mis-logic attempted on a disproof of evolution: [5]

"After Wealth & Poverty, my work focused on the subject of human creativity as epitomized by science and technology and embodied in computers and communications. At the forefront of this field is a discipline called information theory. Largely invented in 1948 by Claude Shannon of MIT, it rigorously explained digital computation and transmission by zero-one, or off-on, codes called “bits.” Shannon defined information as unexpected bits, or “news,” and calculated its passage over a “channel” by elaborate logarithmic rules. That channel could be a wire or another other path across a distance of space, or it could be a transfer of information across a span of time, as in evolution.

Crucial in information theory was the separation of content from conduit — information from the vehicle that transports it. It takes a low-entropy (predictable) carrier to bear high-entropy (unpredictable) messages. A blank sheet of paper is a better vessel for a new message than one already covered with writing. In my book Telecosm (2000), I showed that the most predictable available information carriers were the regular waves of the electromagnetic spectrum and prophesied that all digital information would ultimately flow over it in some way. Whether across time (evolution) or across space (communication), information could not be borne by chemical processes alone, because these processes merged or blended the medium and the message, leaving the data illegible at the other end."

The idiocy of this statement bears witness to the prime example of mathematics gone wrong.

Religion
Glider is vocal opponent of materialism, reductionism, and evolution, and instead supports religious-based concepts intelligence design, irreducible complexity, and a Shannon information theory view of evolution, i.e. that the increase in the information accumulation in the mind circumvents the laws of thermodynamics. [5] Glider also heads the Discovery Institutes, an organization that funds religious-centric science. In other words, Glider is a Bible-backer.

Education
Glider completed a BA in political science in 1962 at Harvard University.