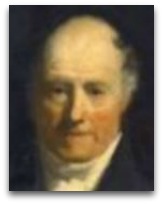 In existographies, George Green (1793-1841) (GPE:#) (CR:16) was a English mathematical physicist noted for his 1828 treatise “An Essay on the Application of Mathematical Analysis to the Theories of Electricity and Magnetism”, in which he introduced the concept of “potential function”. [1]

Overview
Green, starting from Pierre Laplace’s equation, was the first to define the potential as a function of Cartesian coordinates V(x,y,z), particularly the potential energy of an arbitrary static distribution of electric charges.

Some of Green's mathematical concepts seem to have been influential in the writings of Peter Tait and James Maxwell. [5]

Green, independent of, it seems, albeit nearly in the same time period of, Carl Gauss, did the first work on the divergence theorem. [6]

Green also is the eponym of the Gauss-Green-Stokes theorem, the fundamental theorem of calculus:

which asserts that the integral of the derivative of some function in an interval is equal to the difference in the values of the function at the endpoints of the interval: [7]

Education
Green's biography is somewhat remarkable in that he was almost entirely self-taught, having only had about one year of formal schooling as a child between the ages of 8 and 9, after which he read books via a Nottingham Subscription Library to educate himself.

In 1833, aged 40, he later entered Cambridge University, as an undergraduate, and graduated in 1837. After graduation Green stayed on at Cambridge, writing on optics, acoustics, and hydrodynamics. However, in 1840 he became ill and returned to Nottingham where he died the following year.

Mispicture
Green being a relatively obscure genius, photo correctness seems to be an issue. The 2008 book Continuum Thermodynamics, by Polish materials science engineer Krzysztof Wilmanski, for example, mis-pictures a George Green (1793-1841) alongside Augustin Cauchy (1789) and Leonhard Euler (1707-1783), whereas the book photo shown is some American named George Bernard Green (1822-1901). [4]

Further reading
● Green, George. (1837). “On the Laws of the reflexion and Refraction of Light at the Common Surface of two Non-crystallized Media”, Cambridge Phil. Trans. Dec., with Supplement, May, 1839; George Green, “On the Propagation of Light in Crystallized Media”, Cambridge Phil. Trans. May, 1839.
● James, Loan M. (2004). Remarkable Physicists: from Galileo to Yukawa (George Green, pgs. 119-125). Cambridge University Press.