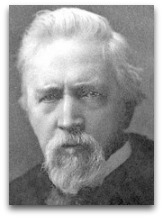 Overview
In 1841, Holyoake, together with radical bookseller Charles Southwell (1814-1860), dissented from the official policy of Owenism, i.e. the utopian socialist philosophy of 19th-century social reformer Robert Owen and his followers and successors, that lecturers should take a religious oath, to enable them to take collections on Sunday; founded the atheist publication Oracle of Reason, because of which he was soon imprisoned because of its content; Holyoake took over as editor, and was moved to an atheist position as a result of his experiences.

Holyoake was influenced by Auguste Comte, Jean Lamarck (Hecht, 2003), and Charles Darwin; he was an associate of Harriet Martineau, an atheist oft-said to have been the first female sociologist, who notable wrote to Holyoake upon reviewing Darwin’s On the Origins of Species. [2]

In 1871, Holyoake, in his The Principles of Secularism Illustrated, discussed Thomas Jefferson’s god questionings. (Ѻ)

Quotes | By
The following are quotes by Holyoake:

“I do not believe there is such a thing as a god.”

“Free thought means fearless thought. It is not deterred by legal penalties, nor by spiritual consequences. Dissent from the Bible does not alarm the true investigator, who takes truth for authority not authority for truth. The thinker who is really free, is independent; he is under no dread; he yields to no menace; he is not dismayed by law, nor custom, nor pulpits, nor society-whose opinion appalls so many. He who has the manly passion of free thought, has no fear of anything, save the fear of error.”