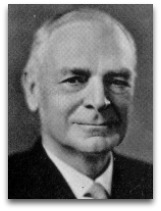 In hmolscience, George Homans (1910-1989) was an American sociologist, part of the Harvard Pareto circle, noted for his 1934 An Introduction to Pareto: His Sociology, co-written with Charles Curtis, wherein the retell the synopsis of the Lawrence Henderson run two-year Vilfredo Pareto seminar at Harvard on mathematical physics and chemistry applied to the social sciences. [1] The following seems to encapsulate Homans existence: [2]

“It was Henderson, the philosopher of science, who told DeVoto to read Pareto, with fateful consequences for me.”

American sociologist Leon Warshay characterizes Homans as having been "mechanistic".

“In my last three years DeVoto was my tutor in my field of English literature, with whom I met once a week to discuss my reading. Henderson had urged the Sociologie on DeVoto, as he urged it on everyone; DeVoto in turn urged it on me, not because it was sociology but because it might clear a lot of nonsense from my mind.”