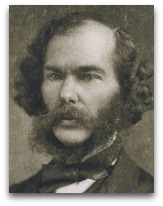 In human chemistry, George Lewes (1817-1878) (CR:14), of-cited as "G.H. Lewis", was an English philosopher and critic of literature who became part of the mid-Victorian ferment of ideas which encouraged discussion of Darwinism, positivism, and religious skepticism, who is noted for his 1855 two-volume Life of Goethe, wherein, together with his lover George Elliot, supposedly, they “analyzed” German polymath Johann Goethe’s 1809 Elective Affinities. [1]

“At length it was resolved to send Minna to school, and this absolute separation saved them both” just as “in the novella, Ottilie also is sent back to school.”

Emergence
In 1875, Lewis, in his Problems of Life and Mind, is oft-cited for his use of the term emergence, which, supposedly, were influenced by John Mill:

“Every resultant is either a sum or a difference of the co-operant forces; their sum, when their directions are the same—their difference, when their directions are contrary. Further, every resultant is clearly traceable in its components, because these are homogeneous and commensurable. It is otherwise with emergents, when, instead of adding measurable motion to measurable motion, or things of one kind to other individuals of their kind, there is a co-operation of things of unlike kinds. The emergent is unlike its components insofar as these are incommensurable, and it cannot be reduced to their sum or their difference.”

Other
Irish mathematical economist Francis Edgeworth, in his discussion of the nervous energy of the consciousness, cites Lewes for some reason. [4]