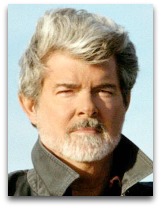 Castaneda
In 1974, American anthropologist Carlos Castaneda (1925-1998), in his Tales of Power, describes his encounters, while taking peyote, with the Yaqui Indian religious shamans, and their models of forces and powers of things, and description of people as "luminous beings". Lucas read this book and used its general scheme as the basis for the now-famous “force” of Star Wars.

“Congratulations to the Cantina crowd and all the forces of your imagination that made Star Wars so worthy of the throne.”

“Lucas had by now simplified the mysticism in his script. Obi-Wan Kenobi would be a guardian of the wisdom of the Jedi knights and the force, a mysterious power that ‘binds the universe together’. Lucas had found the inspiration for the idea in a story in Carlos Castaneda's Tales Of Power (1974), in which a Mexican Indian mystic, Don Juan, described a ‘life force’.”