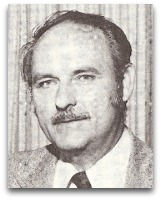 In existographies, George Scott (1921-2002) (IQ:#|#) (SN:30) [CR:53] was an American physical organic chemist, noted for his 1960s to early 1970s efforts to make a two cultures department at the University of South Dakota, which attempted to reconcile Burrhus Skinner’ behaviorism, with Clarence Darrow’s determinism models in respect to crime and punishment, in the context of Zeno of Citium and humans viewed atomically or as “molecular people”, intermixed with some ideas of Ilya Prigogine, whose lectures he attended, which resulted in his 1985 book Atoms of the Living Flame: an Odyssey into Ethics and the Physical Chemistry of Free Will.

USD | Two Cultures | Interdisciplinarity Program
In 1959, Scott, then at the at the University of South Dakota (USD), as he retrospectively explains, in his chapter “Snow Drifts in the Heart of Texas” (a play on C.P. Snow’s Two Cultures [1959] lecture), of his Atoms of the Living Flame (1985) (pgs. 133-39), was chosen as “research director” to oversee the distribution of funds of a grant from the NSF totaling over a quarter of a million dollars, distributed annually over a period of ten years (1959-1969), to support a summer research program for cross-campus departments, including: chemistry, physics, geology, biology, experimental psychology, the behavior of monkeys. In the course of this, Scott worked with Roger Davis, student of Harry Harlow, the monkey mother love behaviorist.

USD | Two Cultures | Honors Program
In late 1960s, NSF funding was cut to the USD summer program, after which Scott became half-time director of a newly formed USD “interdisciplinary honors program”, which covered social sciences, the humanities, business, education, arts, during which he had to set up and fund senior thesis projects, in nearly almost every conceivable subject. During this period, he engaged in debate with Burrhus Skinner scholar Nancy Skeen (c.1945-) (Ѻ), the chairperson of University of South Dakota's philosophy department, keen to Skinner's behaviorist philosophy of things, on the subject of behaviorism, free will, determinism and physical science, revolving around questions such as Clarence Darrow’s determinism models in respect to crime and punishment.

Scott also, during this period, co-taught an interdisciplinary course, with social psychologist George Breed, noted for doing some research on eye contact in human interactions, entitled “Disorder in Nature and Human Affairs”, relating behaviorism and physical science. During one course, Scott did a rock vs human scenario, of him standing on a ladder dropping rocks on people, themed in some way on the Skinner model of pigeons dropping bombs on the Germans, so to argue that people have free will, whereas rocks don’t; which he summarizes as follows:

“During one of our ‘Disorder in Nature and Human Affairs’ courses, I can still remember one fine afternoon, when I tried to explain the difference between human ‘acts’ and deterministic ‘acts’, described by physical natural laws, by describing a street scene in which I carried a rock onto a ladder above a sidewalk and allowed it to drop while people walked underneath. ‘If I had dropped it from the right height and instant, I might have hit someone in the head and killed them. The fall of the rock should be deterministically calculated from Galileo’s formula: h = ½gt ², and the rock will fall according to physical natural law, but the height and timing of the initiation of the fall would be my own ‘free will’ choice!”

Here, of course, we are reminded of Alexander Pope’s poetic quip about a rock falling on his head:

“When the loose mountain trembles from on high; shall gravitation cease, if you go by?”

Scott goes on to discuss how he and Breed argued about this, Breed suggesting that he could Skinnerian like positive conditioning, with “beautiful, voluptuous maidens” to turn Scott into his hitman:

“Suppose, I just waited repeatedly until, by chance, you carried a rock, time after time, up the ladder and every time you came closer and closer to hitting someone on the head, I gave you a ‘beautiful, voluptuous maiden’, like Skinner giving pigeons food to make them dance in figure eights. Then, you’d be conditioned by positive reinforcement to be my hitman, just like Skinner’s pigeons, and it wouldn’t be ‘free will’ act at all!”

Scott, then goes onto tell the story of how Hasan Sabah, as reported by Marco Polo, constructed some sort of lush garden between two mountains, filled with wine, women, and food, and would get newly trained assassins passed out drunk, and leave them to wake up in this mysterious garden, then bring them out, somehow, making them think it was the “afterlife” described by the Koran, and use this as trick to get them to assassinate for him.

Scott also states that during this course he polled his students with the following free will like questions:


The "machine" part here comes from Scott teaching about Julien la Mettrie and or Rene Descartes automatons.
-
Prigogine
In 1974, Scott, while on sabbatical at the University of Texas, attempting to draft his "two cultures" aiming Atoms of the Living Flame book, started to attend the lectures of Ilya Prigogine, who was lecturing on campus. Scott then began to read his books, and understand more of Prigogine, particularly after he won the Nobel Prize in 1977. Scott, thereafter, while not making Prigogine the basis of this book, does include some dissipative structure logic; Scott argues, e.g. that “the action of potential waves on the bubble thin membranes of the nerve cells [which] are the most fundamental control activity in human behavior” are of nonequilibrium thermodynamic phenomena of the sort that could chaotically amplify indeterminate events at the micro level. [2]

Education
Scott completed his BS in chemistry in 1943 at Worchester Polytechnic institute and his PhD in 1949 in organic chemistry, on the subject of infrared study of colchicine, at the University of Rochester in New York under D.S. Tarbell. He then became professor of chemistry at the University of South Dakota, in Vermillion. Scott retired in 1985. [3]

Quotes | Employed
The following are quotes employed by Scott:

“No thing is real but atoms in a void, and all things happen by chance and necessity.”

“The Romans revere flame symbolically, because it is like a living thing. It needs air and sustenance, it moves of itself, and when it is extinguished, with water, it gives out a sound as if it were being slain.”

Quotes | By
The following are noted quotes

“Since my name is not Socrates or Einstein and I hold only one [organic chemistry] of the seven or eight PhD degrees this problem requires, readers are quite justified in questioning my qualifications to testify as such a multidisciplinary expert.”

“Lucretius had two similar words, ‘animus’ and ‘anima’ which he identified with mind and soul and they sometimes create confusion. However, since Epicureans are materialists, they believe that for animus or anima to be real, they must be made of atoms and they must be located somewhere. Lucretius believed they form a union centered, not in the brain, but in the breast, though part of the soul moves throughout the body. Because thoughts and feelings move quickly, and because no change in form or weight is observed upon death, atoms of the soul and mind must be ‘tiny bodies, round and quick to roll’.”

“Those robot machine statues of Diana and Neptune described by Descartes in the royal French gardens and indeed machines in general are highly artificial, specialized, freakish creations. We shall, elaborate the point later, but machines are indeed poor physicochemical models for life. Flames, on the other hand, are common spontaneous natural phenomena that can be set by lightning as well as human hands. The great question about the ‘nature of life’ concerns not really whether ‘man is a machine’ [e.g. La Mettrie (1748)] but whether man is a flame-like phenomenon reducible to nothing but physics and chemistry or whether something non-physical is essential. The physico-chemical reductionism question, as we now call it, took form at this point in history.”

“To a materialist no thing is real but atoms in a void and we are but ‘molecular people’ controlled by the actions of natural physicochemical law.”

“Thermodynamics is the science of absolutely everything.”

“Thermodynamics, unfortunately, has, and almost deserves, the reputation of being the most difficult undergraduate course on campus. This is especially unfortunate for social scientists and humanists, who don’t take it. Some, moreover, will tell you it is the sort of thing they became social scientists or humanists to avoid.”

“The laws of thermodynamics, we assume, apply to the whole biosphere of life in exactly the same way they apply to machinery and black boxes.”