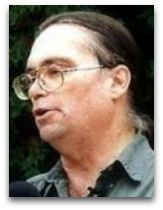 In existographies, George Smith (1949-) is a Japanese-born American libertarian philosopher and famous atheist (#91), of the Randian atheism (Randianism) variety, noted for his 1974 Atheism: the Case against God, wherein he discusses topics such as “implicit atheism” , disbeliever George Holyoake’s 1851 coining of “secularism” as a more neutral indirect term for “atheism”, among other topics. [1]

Quotes | About
The following are quotes on Smith:

“Smith’s Atheism: the Case against God, is the best book on the topic of atheism, due to his strong foundation in Rand's philosophy of objectivism.”

“It is my firm conviction that man has nothing to gain, emotionally or otherwise, by adhering to a falsehood, regardless of how comfortable or sacred that falsehood may appear. Anyone who claims, on the one hand, that he is concerned with human welfare, and who demands, on the other hand, that man must suspend or renounce the use of his reason, is contradicting himself. There can be no knowledge of what is good for man apart from knowledge of reality and human nature, and there is no manner in which this knowledge can be acquired except through reason. To advocate irrationality is to advocate that which is destructive to human life.”