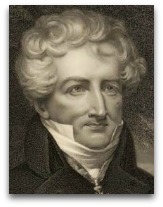 Overview
In 1813, Cuvier, in his Essay on the Theory of the Earth (1813), hypothesized a periodic catastrophic flood theory, conceptualized on Biblical flood theory (see: Noah's flood), according to which new species were "created", not by a processes of evolution, such as espoused by Jean-Baptiste Lamarck and Geoffroy Saint-Hilaire, but by the power of god, such that each species was "fixed" in its god-given place, after each successive flood period.

Hunter
Cuver’s classification of living forms has been compared or contrasted with John Hunter’s scheme, as follows: [1]

“The scope of Hunter's labors may be defined as the explication of the various phases of life exhibited in organized structures, both animal and vegetable, from the simplest to the most highly differentiated. By him, therefore, comparative anatomy was employed, not in subservience to the classification of living forms, as by Cuvier, but as a means of gaining insight into the principle animating and producing these forms, by virtue of which he perceived that, however different in form and faculty, they were all allied to himself. ‘In what does life consist?’ is a question which in his writings he frequently considers, and which seems to have been ever present.”

Macnab
In 1818, Francis Macnab, in his A Theory of the Moral and Physical System of the Universe (§30), in order to recently-discovered fossil records, cites Cuvier’s Theory of the Earth (1813), and concurs something to the effect that the fossils are organized in the layers of the earth as described in Genesis, with human bones found in the upper most layer, and the lowest layer “containing no petrifactions, nor traces of carbon”.

Goethe
In circa 1830, Cuvier’s efforts attracted the attention of Goethe, in his final years, recounted by Johann Eckermann as follows: [2]

“At the close of this (20 Jul 1830), and in the beginning of the next year, Goethe turned again to his favorite studies, the natural sciences. At the suggestion of Boisseree, he occupied himself with deeper inquiries into the laws of the rainbow; and also, from sympathy with the dispute between Cuvier and St. Hilaire, with subjects referring to the metamorphoses of the plant and animal world. He, likewise, revised with me the historical part of the "Theory of Colors," taking also lively interest in a chapter on the blending of colors, which I, by his desire, was arranging to be inserted in the theoretical volume.”

Library
Cuvier, of note, supposedly, is said to have been able to recall in detail the contents all twenty-thousand volumes in his library. [4] This boast, however, is likely over-inflated fiction, compared to known "libraries" (1,000 to 6,000 book range) and minds (e.g. Young to Jefferson).