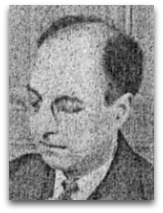 In hmolscience, Georges Guillaume (1896-1969) was a Swiss-French economist noted, in economic thermodynamics, for his 1932 PhD dissertation "On the Fundamentals of the Economy with Rational Forecasting Techniques", co-written with the "mathematical assistance" of his brother physicist Edouard Guillaume, which applied the formalism of thermodynamics to the theory of value. [1]

Overview
In 1932, Guillaume completed his PhD dissertation, entitled "On the Fundamentals of the Economy with Rational Forecasting Techniques", in which the following seems to be thematic: [5]

“It is curious that in political economy, we have not yet succeeded in establishing very general laws, analogous to the fundamental principles of the physico-chemical sciences.”

In 1937, the Guillaume brothers, following fertile discussions of their work at the Ecole Polytechnique, published the book Rational Economics (Economique Rationnelle). [7]

Guillaume’s book is said to be critical of the “Lausanne mathematical school”, i.e. the Lausanne school of economics founded by Leon Walras, as not having based its abstractions upon sufficiently scientific concepts. [2]

In 1938, American mathematician Harold Davis published a joint review of the 1937 book by the Guillaume’s and of Jan Tinbergen’s An Econometric Approach to Business Cycle Problems in the Bulletin of the American Mathematical Society. [12] In 2003, American physicist Joseph McCauley falsely asserted that Guillaume's book was one of the first publications to make neo-classical equilibrium economic analogies with thermodynamics. [2] This, however, is not be the case, being that the use of employing thermodynamics in economics, with respect to economic equilibrium are found in the work of Vilfredo Pareto (1893-1912), and thermodynamics in economics, generally, dates back to at least as far back as the 1875 work of German mathematical physicist Carl Neumann.

A noted recent scholar of the Guillaume brothers is Belgian economist Guido Erreygers.

Bridgman
The Guillaume brothers work is said to be based on the thermodynamics of Percy Bridgman. [8] There main argument or objection, supposedly, was that the subjective concept of value did not obey the principle of conservation. [7]

“I think that the basic intention of the authors, to analyze the economic world, by constructing an analogous fictitious ‘model’, which is sufficiently simplified, so as to allows an absolutely mathematical treatment, is—although not new—sound, and in the spirit of exact sciences. I do not think, however, that the authors have a sufficient amount of mathematical routine and technique, to carry out program out.

I have the impression that the subject is not yet ripe (I mean that it is not yet fully enough understood, which of its features are the essential ones) to be reduced to a small number of fundamental postulates—like geometry, or mechanics (cf. pgs. 77-78). The analogies with thermodynamics are probably misleading (cf. pgs. 69, 85). The authors think that the ‘amortization’ is analogous to ‘entropy’. It seems to me, that if this analogy can be worked out at all, the analogon of ‘entropy’ must be sought in the direction of ‘liquidity’. To be more specific: if the analogon of ‘energy’ is ‘value’ of the estate of an economical subject, then analogon of its thermodynamic ‘free energy’ should be its ‘cash value’.

The technique of the authors to set up and deal with equations is rather primitive, the way, for instance, in which they discuss the fundamental equations (1) and (2) on page 81-85 is incomplete, as they omit to prove that 1: the resulting prices are all positive (or zero), 2: that there is only one such solution. A correct treatment of this particular question, however, exists in the literature. Various other technical details in the setting up of their equations and in their interpretations could be criticized, too. I do not think that their discussion of the ‘stability of solutions’, which is the only satisfactory way to build up a mathematical theory of economic cycles and of crises, is mathematically satisfactory.

The emphasis the authors put on the possibility of states of equilibrium in economics (cf. pgs. 68-69) seems to me to entirely justified. I think that the importance of this point has not always been duly acknowledged. I cannot judge the value of their statistical methods, as they are given in the last part of the book for practical purposes. Their aim is to diagnose the present status of economics, and to lead to forecasts. But I think that the theoretical deduction, which lead to them is weak and incomplete.”

This incident is recounted in greater detail by Canadian economics historian Robert Leonard’s 1995 article “From Parlor Games to Social Science”. In this article, Leonard summarizes that Guillaume's book is an effort to construct a mathematical economics in the manner of Leon Walras and Vilfredo Pareto, treating not just exchange but also global production, along the way drawing parallels between economics and physics. [4]

“Dr. G. Guillaume, whose family was well known to me in Switzerland, has explained to me a method for mechanized determination of the relative values of the various commodities (in unction of time). I believe that the use of this method may be practical and useful in providing an objective way to obtain an incontestable measure of economic values.”

The quote appears in reproduced in their 1947 book The Supreme Arbiter, in which they attempt to outline a “general energetics” theory as a foundation for conflict resolution. [11]

Education
Education Georges worked as a financial trader in the Banque de Paris et de Pays-Bas, after which he completed a PhD in economics in 1932 at the University of Neuchatel, Switzerland, then formed a number of discussion circles with economists and engineers associated with the Ecole Polytechnique. He then founded his own research institute in Paris, where he used his economic models to earn money. After 1945, his work, aiming to pen out some type of universal theory of everything, was said to take a “mystical turn”. [7]

Other
Guillaume is often classified as a "French economist" and was a member of the Centre d’Etude des Problemes Humains (Center for the Study of Human Problems), founded by Jean Coutrot in association with thinkers including: Aldous Huxley, and Pierre Teilhard. [6]