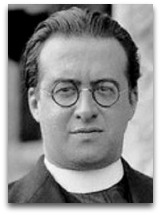 In existographies, Georges Lemaitre (1894-1996) (GPE:#) (CR:7) was a Belgian priest, astronomer, and physicist noted for his 1931 proposition that the universe began as a single “primeval atom”, which broke up into a series of “super-radioactive” decays to form the elements.

Thermodynamics
In 1931, Lemaitre, according to Michael Rowan-Robinson, came up with a "primeval atom" theory origin of the universe from thermodynamic considerations. [1]

Primeval atom theory
In 1931, Lemaitre proposed that the universe began as a single “primeval atom”, which broke up into a series of “super-radioactive” decays to form the elements; a view that he summarized in a later article as follows: [1]

“The atom world broke up into fragments, each fragment into still smaller pieces. Assuming, for the sake of simplicity, that this fragmentation occurred in equal pieces, we find that two hundred and sixty successive fragments were needed in order to reach the present pulverization of matter into poor little atoms which are almost too small to be broken father. The evolution of the world can be compared to a display of fireworks that has just ended: some few red wisps, ashes, and smoke. Standing on a cooled cinder, we see the slow fading of the suns, and we try to recall the vanished brilliance of the origin of the worlds.”

Lemaitre's aim was to speculate about how the periodic table as a whole might have originated.

In 1949, Fred Hoyle coined the phrase that came to be applied to Lemaitre's exploding atom theory of the universe, referring to it as "this big bang idea" during a BBC Radio broadcast, thereafter coming to be known as “big bang” theory.

“As far as I see, such a theory [of the primeval atom] remains entirely outside any metaphysical or religious question. It leaves the materialist free to deny any transcendental being. He may keep, for the bottom of space-time, the same attitude of mind he has been able to adopt for events occurring in non-singular places in space-time. For the believer, it removes any attempt to familiarity with god, as were Laplace's chiquenaude or Jeans' finger. It is consonant with the wording of Isaiah speaking of the 'hidden god' hidden even in the beginning of the universe ... Science has not to surrender in face of the universe and when Pascal tries to infer the existence of god from the supposed infinitude of nature, we may think that he is looking in the wrong direction.”

— Georges Lemaitre (1958), “The Primeval Atom Hypothesis and the Problem of Clusters of Galaxies” [2]