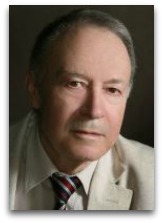 In existographies, Georgi Pavlovich Gladyshev (1936-) (SNE:12) [CR:213] is a Russian physical chemist noted for his 1978 Gibbs free energy theory of evolution and sociology (sociological thermodynamics), both modeled on the movement of particles in the thermodynamics of chromatography, for his circa 1990s thermodynamic anti-aging theories of foodstuffs, and for his theoretical contributions to the development of human thermodynamics beginning in 2005. [1]

This theory was written in direct opposition to the non-equilibrium thermodynamic evolution theory of Belgian chemist Ilya Prigogine, winner of the 1977 Nobel Prize in chemistry for his dissipative structure evolution theory in which biological structure is argued to self-assemble in thermodynamic systems far from equilibrium through the method of bifurcations and fluctuations. [3]

In 2007 and audio recording of Gladyshev lecturing at the American Association for Anti Aging Medicine (A4M) Conference in Las Vegas was recorded. [5]

The following is 2000 memo (in Russian) with a circa 2010 hand-written note (in English) by Gladyshev, sent to American electrochemical engineer Libb Thims, in a package of Gladyshev's collected works on his various thermodynamic theories, wherein he points out that from some time, since at least the late 1990s, he has been under the strong conviction that "history can be predicted" using thermodynamics.

Thims
Beginning in 2005, Gladyshev began collaborating with American chemical engineer Libb Thims in the exchange of ideas and development of new theory. Gladyshev was of great influence to Thims, especially in construction and subsequent publication of his first two books, the 2007 Human Chemistry and the 2008 The Human Molecule. In December 2007, Thims and Gladyshev started the Encyclopedia of Human Thermodynamics.

Thermodynamic theory of the evolution of living beings

See main: Thermodynamic Theory of the Evolution of Living Beings

In 1997, Gladyshev published his 142-page book Thermodynamic Theory of the Evolution of Living Beings, in Russian and English, in which he set forth the first unified theory of the origin and evolution of living beings from the view point of thermodynamics, built on the chemical thermodynamics work of American mathematical engineer Willard Gibbs. [1]

The logic of Gladyshev's thermodynamics constitutes what he calls "hierarchical thermodynamics". This theory, to note, was in direct contrast to the more-established 1970s paradigm of the far-from-equilibrium dissipative structure theory of Belgian chemist Ilya Prigogine, who developed an “internal entropy” generation function model to account for the appearance of spontaneously forming ordered structures in the high heat flow regime of viscous mediums, such as the formation of Bénard cells in silicon oil placed on a hot plate, in which the heat is turned up past the turbulent flow regime.

Living systems evolution model
During the process of the evolution of the earth, according to Gladyshev, the existence of local equilibrium, within sub-systems of the biosphere, each being found surrounded by isothermal and isobaric thermostats, means that at times comparable with the periods of relaxation to equilibrium we deal with a set of thermodynamically closed microvolumes, i.e. an elementary volume that is still so large that it contains a great number of particles, constituting the phase under consideration. Within this phase, according to the laws of chemical thermodynamics, the integral value of the specific, i.e. averaged over the volume, Gibbs function corresponding to the formation of averaged local “evolved” conformation of aggregated supramolecular structures achieves a minimum:

Here, V is the volume of the system, m the mass of the selected microvolumes; x, y, and z the coordinates; the bar "–" means that the specific value is considered and the tilde "~" symbol indicating a heterogeneous system; the "im" superscript indicating the intermolecular component of the system.

Gladyshev was born September 19, 1936 in Alma-Ata, Russia. In 1959, he graduated from the Chemistry Department of the State University in Alma-Ata in and in 1962 received the Degree of Candidate of Science (Ph.D.) and a Doctorate Degree in polymer chemistry in 1966. He became Professor of Physical Chemistry in 1969. In about 1975, Gladyshev began working on the problem of the thermodynamics of the macro-biological scale.