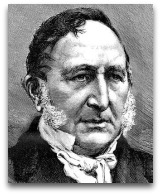 Overview
In circa 1837, Mulder conducted an experiment, done on the advice of Swedish chemist Jacob Berzelius, and results of which, as summarized by Scottish agricultural chemist James Johnston (1846), were as follows: [1]

“Mulder examined the fibrin of blood, the albumen or white of the egg, and the gluten of wheat. When these substances are dissolved in caustic potash, with the requisite precautions, and the solution is then made slightly acid by the addition of vinegar, a white precipitate falls, which Mulder collected and carefully analyzed. To this substance, for certain theoretical reasons, he gave the name of protein. It was free from sulphur and phosphorus,—both of which are contained in the albumen of the egg and the fibrin of the blood. It consisted of carbon, hydrogen, nitrogen, and oxygen only, and was represented by him by the formula: C40 H51 N5 O12.”

In modern terms, with the addition of sulfur and phosphorus, what Mulder found in his elemental analysis of common proteins, is that nearly all proteins have the following 6-element empirical formula: [2]

This may have had some type of influential connection to the Hill order based CHNOPS model of protoplasm (living substance).

“The name protein that I propose for the organic oxide of fibrin and albumin, I wanted to derive from Greek word πρωτειος [primacy], because it appears to be the primitive or principal substance of animal nutrition.”

Mulder went on this suggestion and used the name in his 1838 publication “On the Composition of Some Animal Substances” assigned the name “protein” for the organic oxide of fibrin and albumin.

Animal | Vegetable life debate
Mulder’s discovery was said to have sparked a heated debate between the so-called difference between "animal life" and "plant life" or vegetable life.