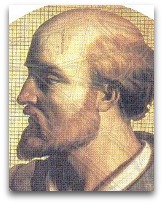 Overview
In c.990, Gerbertus, as reported by historian William of Malmesbury (c.1095-1143) (Ѻ), built some type of organ blown by air escaping from a vessel in which it was compressed by heated water, which is sometimes cited as being an early steam engine of some sort. [1]

Quotes | On
The following are quotes on Gerber:

“Hero's engine (150 BC) was a form of reaction turbine; Gerbert, a professor in the schools of Rheims, had an ‘organ worked by heated water’; Leonardo da Vinci (about 1500) proposed a steam gun; Cardan (about 1550) devised a machine using the vacuum from condensed steam; Porta (Naples, 1601) raised water by steam pressure, also using the vacuum idea; and de Caus (France, about 1600) forced water up by a steam fountain’. A different type of machine (corresponding to the impulse turbine) was the steam ‘hurdy-gurdy’ of Branca, in Italy, in 1629. All of the foregoing types may be said to be experimental or preparatory to the period which followed. The first machine which did actual work was that of Edward Somerset, Marquis of Worcester, in about 1663. We next hear of an alcohol engine, using a surface condenser, proposed by Hautefeuille (1678). This appears to have been forgotten. In 1690 the Frenchman Papin devised the first engine with a piston, and in 1698 Thomas Savery patented an apparatus for lifting water from the Cornish mines. Two vessels were filled with steam alternately, the maximum lift being 24 feet. This type is still in use; it is known as the "pulsometer." It may be of interest to note that the story of the "boy and the teakettle" is told of Worcester, of Savery, and of Watt. Thomas Newcomen in 1705 produced a machine where a jet of water was thrown into the cylinder. In all these engines, the valves were worked by hand. Now we come to the story of Humphrey Potter, the boy who in 1713 devised a self-acting valve motion which he called a "scrogger." With practically no other improvement, the steam engine remained as it was for about forty years. James Watt in 1763 was repairing a model of an engine (Newcomen type) from a collection in a college in Glasgow. In 1765 the idea of the separate condenser struck him, and he then began his great work. Though sometimes discouraged and reduced to poverty, forced to discontinue his experiments and go to work at surveying for support, he persevered; and the next ten years saw the addition of the governor, expansive working, the indicator, the principle of compounding, etc. He found the steam engine a crude and imperfect apparatus, and left it a marvelous instrument for the progress of the world.”