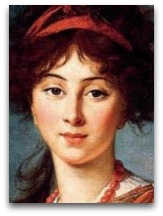 Education
Stael was the only child of Swiss-born French statesman and financier Jacques Necker (1732-1804) (IQ:155|#553) (Cattell 1000:235) and Swiss-born Suzanne Curchod (Suzanne Necker), noted for her who hostessing of Rue de la Chaussée-d'Antin one of the most popular salons of Paris. Her mother, at an early age, tried to make her into a prodigy of sorts, piling the books on her.

Suzanne wanted to educate her daughter according to the principles of Jean Rousseau and to endow her with the intellectual education and Calvinist discipline instilled in her by her own Protestant pastor father; accordingly, she habitually brought Germaine as a young child to sit at her feet in her salon, where the guests, e.g. Comte de Buffon, Jean-François Marmontel, Melchior Grimm, Edward Gibbon, the Abbé Raynal, and Jean-François de la Harpe, took pleasure in stimulating the brilliant child. This exposure occasioned a nervous breakdown in adolescence, but the seeds of a literary vocation had been sown.

At the age of thirteen she read Charles Montesquieu, William Shakespeare, Jean Rousseau and Dante Alighieri.

Germany
In 1803, Stael was banned from France in by Napoleon, for publishing her controversial novel Delphine, after which she migrated to Germany and entered into the Goethe circle; upgrade for commenting favorably on Goethe’s Elective Affinities.At Weimar she learned the German language and was said to have “astonished and perplexed Goethe and Schiller by her remarkable conversation and her virile intellect so strongly contrasted with her vivacity.” [3]

Quotes | On
The following are quotes on Stael:

“She was a woman of considerable talent and of great ambition, but so extremely intriguing and restless as to give rise to the observation that she would throw her friends into the sea, that, at the moment of drowning, she might have an opportunity of saving them. I was obliged to banish her from court. She was ardent in her passions, vehement and extravagant in her expressions.”

“Madame de Stael, whose work on Germany is probably the greatest book ever produced by a woman, is supposed to have been intimate with August Wilhelm Schlegel, who was a homo-sexualist, and who had been tutor to her children.”

Quotes | By
The following are quotes by Stael:

“To understand all, is to pardon all.”

“One cannot deny that there is in this book [Elective Affinities] a profound understanding of the human heart, but it is a discouraging one. Life is presented as a thing of indifferent value, however one regards it—sad when one gets to the bottom of it, pleasant enough when one evades it, prone to moral ills, which one must cure if one can and of which one must die if one cannot.”