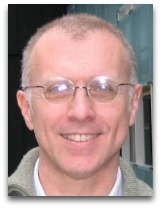 In existographies, Gian Beretta (c.1951-) (CR:4) is an Italian thermodynamicist, of the MIT school of thermodynamics, noted for []

Overview
Beretta believes that Joseph Keenan’s 1965 Principles of General Thermodynamics, co-authored with Elias Gyftopoulos, was the greatest thermodynamics textbook of the 20th century.

Beretta was one of the peer reviewers (Ѻ) for Libb Thims’ 2007 Human Chemistry.

Quotes | By
The following are quotes by Beretta:

“Physics is the science that attempts to describe all aspects of all phenomenon pertaining to the perceivable universe. It can be viewed as a large tree with many branches, such as mechanics, electromagnetism, gravitation, and chemistry, each specialized in the description of a particular class of phenomenon. Thermodynamics [however] is not a branch … it pervades the entire tree.”