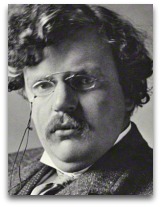 “Men believe that death is stronger than life, and therefore dead things must be stronger than living things; whether those dead things are gold and iron and machinery or rocks and rivers and forces of nature. It may sound fanciful to say that men we meet at tea tables or talk to at garden-parties are secretly worshippers of Baal or Moloch. But this sort of commercial mind has its own cosmic vision and it is the vision of Carthage. It has in it the brutal blunder that was the ruin of Carthage. The Punic power fell, because there is in this materialism a mad indifference to real thought. By disbelieving in the soul, it comes to disbelieving in the mind.”

“An open mind, like an open mouth, does have a purpose: to close upon something solid.”

Quotes | Attributed
The following are quotes attributed to Chesterton, but not found extant:

“When men stop believing in god, they don’t believe in nothing, they believe in anything.”

— Gilbert Chesterton (c.1930), Widely attributed (Ѻ), although not traced in his works; first recorded (Ѻ) as ‘The first effect of not believing in god is to believe in anything’ in Emile Cammaerts Chesterton: The Laughing Prophet (1937)