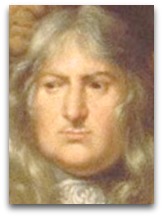 Overview
In 1628, Roberval arrived in Paris in 1628 and made contact with “Mersenne's circle”, that centered around Marin Mersenne, with Claude Hardy, Claude Mydorge, Etienne Pascal, and Blaise Pascal. [1]

Quotes | On
The following are quotes on Roberval:

“They began to discuss the problem of the vacuum. Descartes became particularly serious on the subject. The others explained a recent experiment to him and asked him what he thought entered into the space of the emptied tube. He said that it was his ‘subtle matter’. My brother [Blaise Pascal] responded to this theory as best he could. Believing that my brother was having some difficulty expressing himself, Roberval took on Descartes with not a little passion, although he remained civil. Descartes responded rather bitterly that he could speak to my brother as long as he desired because my brother spoke reasonably but that he wouldn't continue to talk with Roberval, because the latter spoke out of too many prejudices. With that, he glanced at his watch and saw that it was noon. He stood up, because he had a dinner date in the Faubourg Saint-Germain.”